Dave Woodhall on Villa, spirituality and the League Cup. 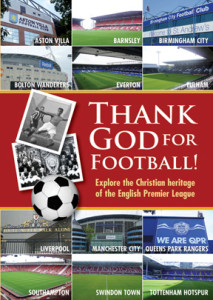 On Monday I attended the launch of Thank God for Football, a DVD of the book of the same name, which tells the story of many of the clubs that were founded by religious groups. As you can imagine, it’s a fascinating story for anyone with an interest in the early history of the game and what’s particularly interesting is how some of the biggest modern clubs grew from humble beginnings.

Three of the clubs in particular, Villa, Everton and Spurs, could be said to have travelled furthest from their spiritual roots (Manchester City were also included but they haven’t permanently travelled very far, they’re just on holiday for a few years) and it’s also interesting to see how far their philosophies have moved away from the original aims of their founding fathers. I try to remain unbiased when I look at Villa in such matters but I still remain convinced that Villa have instinctively done the right thing since 1874. Basic decency is in the DNA of our club, woven into its fabric as deeply as wearing claret and blue. Obviously I don’t know as much about the others but Everton have always struck me as a club grounded in the community but as for Spurs, in my lifetime there’s always been something a bit spivvy about them. They were one of the first clubs to fully embrace commercialism, to charge what they could get away with rather than a fair price for tickets and to have odious characters such as Irving Scholar and Alan Sugar in control. And I thought that before last night.

Part-timer that I am, I didn’t go so I won’t comment about the match. What I will say is that nobody should have been too shocked by either the result or the team Villa fielded. One of the biggest difference between the clubs at the top and those lower down is strength in depth, and so it proved. At the moment Spurs are at the top of a cycle, aided by some wise transfer deals, the right manager being available at the right time and them possessing a player that the only club in the world who make Manchester City look frugal coveted more than any other. Villa, in contrast, are just coming out of the bottom of a cycle. Spurs might last for a few years at the top but eventually they’ll slide down again. Villa will improve, as they always do. It might take time but it’ll happen.

As for the team selection, how many of those missing were injured and how many of those injuries would have been serious enough to be kept out of a league match is open to debate. It’s no good complaining about Lambert throwing away the chance of a trophy; it was happening before he was manager and unless something dramatic happens it’s an attitude that’s here to stay. In the past ten years I can think of a handful of occasions when Villa have put out a full-strength side in the League Cup, and never at such an early stage. The attendance last night bore this out – somewhere between a third and a half of our regular support stayed away. It’s a chicken and egg situation but both manager and supporters could point at each other and say “If he’s not bothering why should I?”

I wish we could get back to the days when a cup tie, even such an early one, was more important than all but a handful of league games but those days have gone. There’s more chance of Villa competing with Spurs for a place in the top four than there is of us getting 40,000 against them for a League Cup game.

Thank God for Football, by Peter Lupson, is out now and widely available.