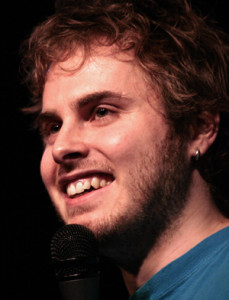 Sit Down, Stand Up, The Public’s much loved comedy club night, returns to the West Bromwich venue on Friday 27th September.

Over the last twelve months the mixed bill comedy night, held in association with the Avalon Comedy Network, has featured some of the best known upcoming names in live comedy in the UK.

September’s show, the last Sit Down, Stand Up at The Public, will feature five outstanding comics, including 2010 Foster’s Edinburgh Comedy Award Best Newcomer Nominee, Gareth Richards. Richards, who has performed his infamous Fridge Song on Russell Howard’s Good News, delivers engaging observational comedy and inspired one-liners which have made him in an instant favourite on the comedy circuit.

Support comes from former Chortle Student Comedy Award Winner, Phil Wang, who featured in the Top ten gags of the Edingburgh Fringe this year, Hayley Ellis, and her girl-next-door charm and Andrew McBurney, winner of Best Newcomer 2012 and Best Joke 2012 at West Midlands Comedy Awards.  Compere for the evening will be James Cook, back on the comedy circuit full time after seven years as an NTL award-winning commercial radio presenter.

A spokesperson from The Public said, “Sit Down, Stand Up represents fantastic value for money, with the opportunity to see five outstanding comics for just £8. Avalon Promotions are one of the leading names in UK live comedy so we’re delighted to have worked with them over the last 12 months.”

Over the next month The Public will also welcome Edinburgh Comedy Award Winner, Russell Kane on 5th October, with his new show, Smallness, and ‘one of the top 10 best female comics’, Gina Yashere, on 19th October.

For more information about events at The Public visit www.thepublic.com or call 0121 533 7161.