Alan Clawley looks back at the controversy surrounding the old and new Birmingham Libraries. 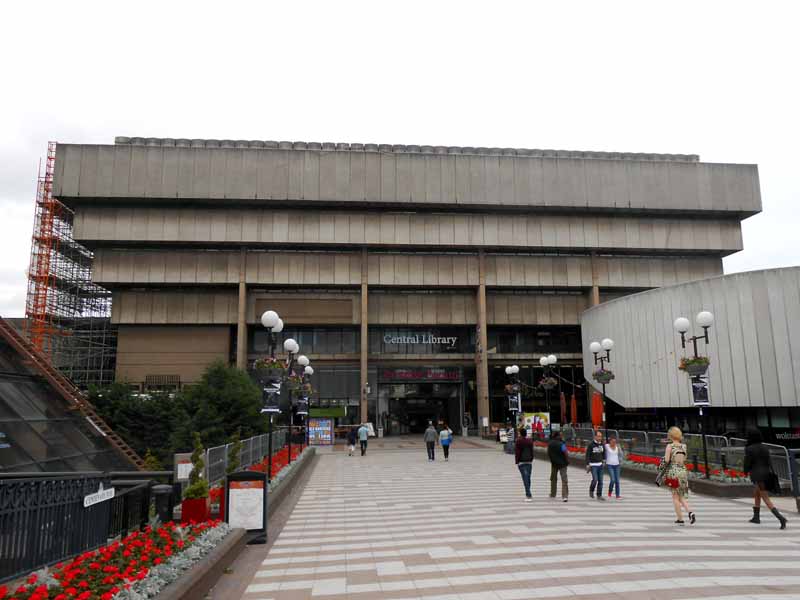 With all the razamattaz that will surround the opening of the Library of Birmingham in September it will be easy to forget why the Council wanted to demolish the Central Library in the first place.

It’s not really because of its age, its appearance or its relationship with its historical neighbours but because, along with all the other buildings in Paradise Citcus, it would enable a Council leader and a developer to achieve a shared ambition to ‘comprehensively redevelop’ Paradise Circus.

They were not content to complete John Madin’s master plan for the site by working round the buildings that already existed and utilising the vacant land on its northern half. Nothing short of a clean sheet was good enough for them. The work of Birmingham’s foremost modern architect counted for nothing in their overweening desire to stamp their own ideas on the whole site.

Re-locating the ‘library’ was, however, just the first and easiest piece of an extremely complex jigsaw. Even this took 13 years. The problem facing the Council now is that it no longer owns all the property in Paradise Circus. It sold off its interests to the likes of the Copthorne Hotel, the Conservatoire and Henry Boot during the 1980s.

So, if it is to comprehensively develop the site it must control all the property interests and have the power to demolish everything on the site before the developer will start building. But for whatever reason, the owners aren’t willing to sell to the Council voluntarily. Hence the Council’s application for a Compulsory Purchase Order (CPO) on the whole site.

The need to resort to a CPO suggests that the process of land assembly is not going well. CPO s were historically used to confiscate private property from slum landlords and justified because of the suffering of their tenants. The large-scale slum clearance programmes mounted in the post-war years in Birmingham and other cities would not have been possible without local authorities having the power to take over large swathes of housing on grounds that it was ‘unfit for human habitation’ as defined under Public Health legislation. Inspectors could verify real factors such as dampness, lack of washing facilities and poor ventilation in declaring a house ‘unfit’. The public supported such CPOs on the whole feeling that negligent property owners deserved to have their property taken away by force.

Private landlords today are held in higher regard and their properties are more tightly regulated, but, the state found a new use for the powers it once enjoyed, they simply chose another target. CPOs can now be used under the Town and Country Planning Act 1990 for less obvious problems than slum clearance. They can now seek a CPO to expedite a ‘scheme of development’ or ‘redevelopment’. They simply have to convince the government that the acquisition will facilitate carrying it out and that it is ‘likely’ to contribute to the ‘promotion or improvement of the social, economic, or environmental well-being of the area’. Satisfying just one of these criteria will do.

The worry is that a clever local authority can find the words to spin their way round these vague requirements. There is no legal definition of ‘well-being’ as there was for ‘unfitness’. The authority only has to show that improvement is ‘likely’. It can quote the number of new jobs that are likely to be created by the redevelopment, but who will be around in 15 years time to check on the outcome, even if it were possible to identify the jobs?

As well as buying back property the Council and its partner have a duty to offer alternative accommodation to the present occupiers, just as the Council had to offer tenants of condemned slums a new house in Chelmsley Wood.

The Conservatoire has been offered Louisa Ryland House but it isn’t likely to be big enough. It certainly won’t house a replacement for the Adrian Boult Hall so the developer has offered to build a new concert hall at the base of one of its office blocks a few metres away from the existing building.

The final pieces of the jigsaw are the occupiers and tenants of the new buildings who will repay the developer’s capital investment. The only known tenant is the Copthorne Hotel who just want to move their hotel from where it is to where the Conservatoire is now. The advantage of such a bizarre move is, apparently, that the new hotel will be 23 storeys high and therefore more like other hotels in the city centre.

It would be folly to demolish the Central Library in 2015 just to avoid the possibility that Friends of the Central Library may apply to have the building listed (the Council’s Certificate of Immunity expires in February 2016). Council and developer must surely wait until all the pieces of the jigsaw are in place whenever that might be.

2 thoughts on “When the state steps in”