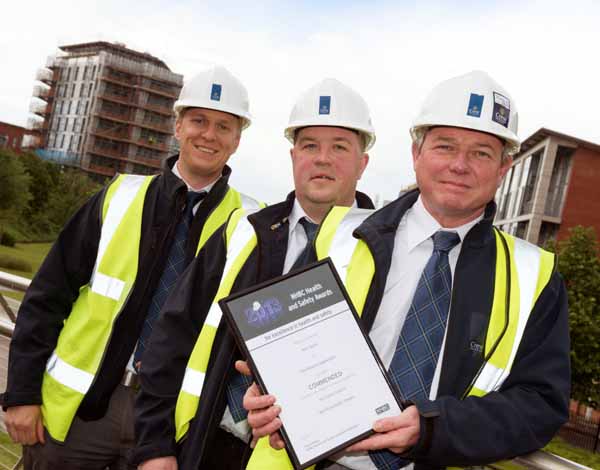 Led by senior project manager Pete Bayliss, the construction team has been recognised in both the NHBC Health and Safety Award and NHBC Pride of the Job Award. The awards celebrate the team’s exemplary dedication to health and safety on the latest housing phase at Park Central, Central Plaza, along with the overall image of the site, including build quality, external façade and the working environment.

Striving to improve health and safety standards within the house building industry, Crest Nicholson has pioneered new safety and operating procedures for the mastclimber access strategy at Park Central and has set outstanding housekeeping and workplace standards.

Pete Bayliss said: “Health and safety must always be a top priority at building sites and I am lucky to be leading such a motivated and sensible team at Park Central, all of whom are 100 per cent dedicated to delivering homes that we can be incredibly proud of.

“I’ve been working at Park Central since construction began ten years ago and it’s incredible to see just how far the development has come in that time. We’re honoured to have been commended in not just the NHBC Health and Safety Award but also the Pride in the Job Award and we will continue to aim for these recognitions throughout the build programme at Park Central.”

Construction is now more than 60 per cent complete at Central Plaza, with the first homeowners due to move into their new properties in September. Prices for the apartments start from as little as £117,000 for a spacious one bedroom apartment and from £158,000 for a two bedroom apartment. A range of schemes, including the Government’s new equity loan scheme Help to Buy are available on the properties, designed to help first time buyers struggling to save a large deposit to own their own home.

Each of the apartments have been designed with an open-plan kitchen and living area leading onto a balcony or ground floor terrace overlooking the parkland that is central to the development. A new show apartment has just opened at Park Central, giving househunters their first chance to look round one of the two bedroom homes in Central Plaza.

The construction team at Park Central will find out if they are one of the winners in the NHBC awards at a special ceremony at the ICC in Birmingham later this month.