This week Laurence Inman is in an arboreal mood. 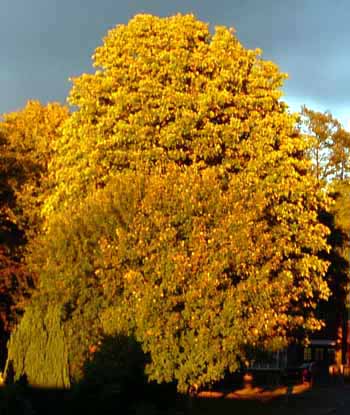 To paraphrase Walt Whitman, I think I could turn and live with trees.

Some years ago, shortly after I learnt that there were such people as tree-huggers, I met one while working on a film. She was almost apologetic when she mentioned it and became a little defensive when I smiled at her news. But I was smiling with something approaching delight at the whole idea, and at the fact that she couldn’t resist telling people, despite the obvious risk of being ridiculed.

I couldn’t be that brave. I would love to hug a tree, but I simply don’t have the nerve to stroll down to Highbury Park and do it, not when I know that other park-users, strangers or not, might see me.

There are trees in the park that were there when I first set foot in it, fifty years ago, to see Kenny Ball and his Jazzmen play down by the little bridge over the stream. (I didn’t dream it!) The first house I owned, in a village in Leicestershire, faced a green planted with a few saplings. When I dropped round there a few years ago on my way to somewhere else, they had grown to mature sturdiness. This applies to everywhere I’ve lived and known. Oxford Place in Rusholme, Manchester: in June it’s like a road winding through a forest.

In my last year at primary school I would often turn and gaze out of the window at a tree standing on the side of Longbridge Lane. In winter I could see every branch and on one of them was a small out-growth exactly in the shape of a Cross of Lorraine. That tree is still there, looking a bit bedraggled. (I’m ashamed to say that I don’t, to this day, know what kind it is.) All the trees along that stretch of road survive. One of these days I’m going to see if that little growth is still visible. I might even try to get permission to go up to my old classroom, and have a look from there.

The other day I was glancing through some of those picture books produced by Alton Douglas of the Birmingham Post. It was ‘Birmingham at War.’ On page 64 is an aerial reconnaissance photograph taken by a German pilot in October 1940, of the Austin works in Longbridge. At the northern edge you can see the whole length of Longbridge Lane, from the Bristol Road east towards the Redditch Road. The house I grew up in has yet to be built. So has St John’s Church, the Jolly Fitter pub (long gone now) and the school.

But the stream through the field is clearly visible, and so are all the trees along the lane. One of them is mine.