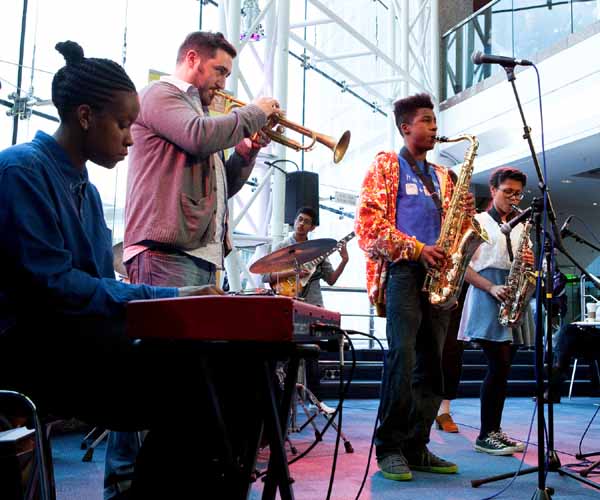 Birmingham today takes a step closer to securing its status as a major force in UK jazz music with the announcement that leading music organisation Town Hall and Symphony Hall is to significantly broaden the number of opportunities for young jazz musicians in the city.

Two grants totalling £175,000 from the Esmée Fairbairn Foundation and The Leverhulme Trust spread over three years will enable THSH – specifically through its Jazzlines and Education & Community teams – to increase its capacity to discover, develop and help promote young jazz artists via a range of projects and initiatives.

Professional development workshops, bespoke masterclasses with leading international artists, summer schools, and performance opportunities at music venues and festivals across the city will ensure guidance, tuition and encouragement for young musicians– from their first access to jazz as children through to the early stages of their career as young adults.

The announcement marks a further commitment by THSH to invest in a new generation of jazz creatives in Birmingham; one of Europe’s youngest cities and regarded as a nerve centre for music in the UK.  The music organisation – a registered charity and one of the UK’s biggest jazz promoters, commissioners, and educators – will use the skills and knowledge of its team of experienced industry professionals and an extended network of specialist partners to build on a successful history of planning and managing projects in this area.

Mary Wakelam Sloan, Jazzlines Programme Manager, said: “The generous support of the Esmée Fairbairn Foundation and The Leverhulme Trust, coupled with the existing backing of the Jerwood Charitable Foundation and BBC Performing Arts Fund, will empower us further to discover, develop and help promote the next generation of jazz creatives in Birmingham. This is a major step forward in securing the city’s place on the UK’s music map – we’re thrilled to be leading the way.”

Reuben James, a 20 year old Birmingham musician described as “fast becoming Britain’s best young jazz pianist” by The Times is a perfect example of the city’s new generation of jazz artists making waves at home and beyond, and is part of the Birmingham’s New Beat Generation campaign. Following regular mentoring from the Jazzlines team with support from the late Abram Wilson, Reuben is now playing with Ruby Turner, UK pop artist Sam Smith and a number of ensembles that regularly perform at Ronnie Scott’s. Last year, with the Jazzlines Trio, he supported Wayne Shorter at Birmingham Town Hall and made his Cheltenham Jazz Festival debut with the Reuben James Trio. He said: “It’s fantastic to be involved with Jazzlines – they have supported me for years and are a real force in Birmingham delivering youth jazz projects. They have given me the opportunity to showcase my music and develop as an artist as well as an educator. I can’t wait for our future projects together.”

Birmingham has a strong and varied jazz music heritage, which takes in the Town Hall’s position as a major jazz venue during the 1950s and 1960s and the success of musicians such as Andy Hamilton MBE, Tony Levin and Dave Holland, right up to current day contemporary creative artists and ventures such as Soweto Kinch, Shabaka Hutchings, Blam! Birmingham, the Yardbird, Harmonic Festival and the Mostly Jazz, Funk and Soul Festival.