The first ever Lichfield Rocks festival raised over £2,500 for St Giles Hospice in Whittington. 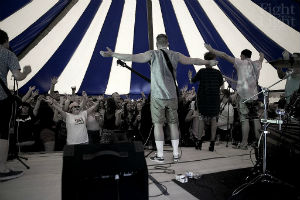 The event, which was organised by local art rockers Stubblemelt, showcased a host of talented local artists alongside family fun activities such as a penalty shootout, face painting and a barbecue. Funds were raised from visitors who were asked to make a donation towards St Giles Hospice upon entry. The final amount handed over to the charity was a total of £2,921.51.

St Giles Hospice works to provide much needed care to sufferers of serious illnesses and their families. The charity is close to the heart of band members at Stubblemelt and was an obvious choice to benefit from the fundraiser. Drummer Dave Ashford’s mother was diagnosed with multiple sclerosis 20 years ago, a condition that has worsened over the past five years. With help and support from St Giles, she has been able to live with the condition and remains positive. She even turned up at the event herself as a surprise guest to receive a round of applause from everyone in attendance which reduced her to tears before Stubblemelt’s headline set.

Dave Ashford said: “St Giles Hospice has really helped my mum to manage her condition with regular exercise classes and social activities. It was a real honour for us to be able to organise and host Lichfield Rocks Festival and we were delighted to raise so much money to say our own personal thank you to St Giles for the great work they do.”

Currently working on their first official full length album for release March 2014, Stubblemelt organised and hosted Lichfield Rocks amid a busy diary of live performances and although the group can claim the likes of JLS among some of the groups they have performed with live on stage, frontman Kyle Perry cites Lichfield Rocks as one of their best ever shows. Kyle has also experienced first-hand the support and care provided by St Giles Hospice after the charity helped his auntie before she lost her own battle to cancer ten years ago.

“We are absolutely thrilled to raise so much money for St Giles and Lichfield Rocks turned out be a really fantastic event,” Kyle said.

”I want to thank the artists and bands who performed on the day. It was humbling to have such great talent support our cause. The people who came along to the festival from throughout the Midlands were extremely generous putting their hands in their pockets for such a worthwhile cause and in return we showed them some of the best local talent the region has to offer.”

Music on the day was performed on two different stages; a main stage and an acoustic stage and among some of the local talent performing with Stubblemelt was JAWS, Ghouls, Of Kings and Captains, Boat to Row, Matt Sheehan, Produkty and D’Votions. The event was such a success that plans are already underway for a repeat event next year.