Alan Clawley with a reminder that when the architects in John Madin’s office were working up plans for a new central library for Birmingham, they were also designing one for Redditch. 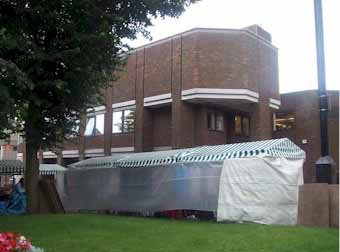 It’s not surprising therefore that the two buildings have quite a lot in common as well as some stark differences. Sheer size is one difference, but their treatment by their owners is another.

Arriving in Redditch’s Market Place after walking through the Kingfisher Shopping Centre is like stepping out of a space ship into an old Worcestershire town. It’s easy to forget when you’re standing there that Redditch became a New Town in 1964. The 1976 library sits on one side of the Square more or less surrounded by stalls. It’s built of dark brick and the floors are made of pre-cast coffered concrete units like Birmingham’s library. In true Madin style, the ceilings inside are the same as those outside and walls inside use the same bricks as on the outside. There’s the same internal flow of space between floors.

The coffered ceilings and the exposed brickwork so typically Madin came to be disliked by both sets of librarians because they made the interiors too dark. It is true that unless each coffer is individually up-lit, ambient light doesn’t penetrate their deep recesses. And, as every home decorator knows, dark brickwork doesn’t reflect the light.

Victorian libraries and even those built in 1970s were designed like sacred spaces in which precious books and manuscripts were looked after by librarians and protected from the destructive effect of daylight. Low light levels, few windows and the rule of silence resulted in public libraries being church-like The message they gave to the world was that only people bent on serious scholarship need enter their doors. Although this idea still prevailed in 1970s the Birmingham library only adopted it on the Reference Library – the inverted ziggurat with small high-level windows on the outside. The curving semi-detached block of the Lending Library in contrast has big windows and was easily accessible from Chamberlain Square.

It seems that some time after the Redditch and Birmingham libraries were designed professional librarians changed their attitude. They now wanted public libraries to look like they were completely open and accessible to everyone – the romantic paperback reader, the family historian, the internet surfer or the passing tourist. Letting in the light symbolised the new type of public library, one said to be fit for a new century. 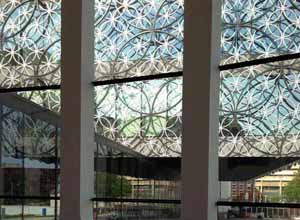 In Birmingham this new attitude resulted in the ultimate rejection by librarians of Madin’s 1974 building and its replacement with Mecanoo’s 2013 version. ‘Transparency, ‘light’, and  ‘views out’, were the recurring themes used to justify its £200 million cost. No serious efforts were made to find out whether Madin’s building could be modified to achieve the same results.

In Redditch the owners of the library decided to keep the building but to lighten up the interior. The coffered ceilings were panelled in. Some brick balustrades were replaced by glass. Glazed screens were installed around the atrium. Everywhere was painted white and illuminated by energy-efficient up-lighters. 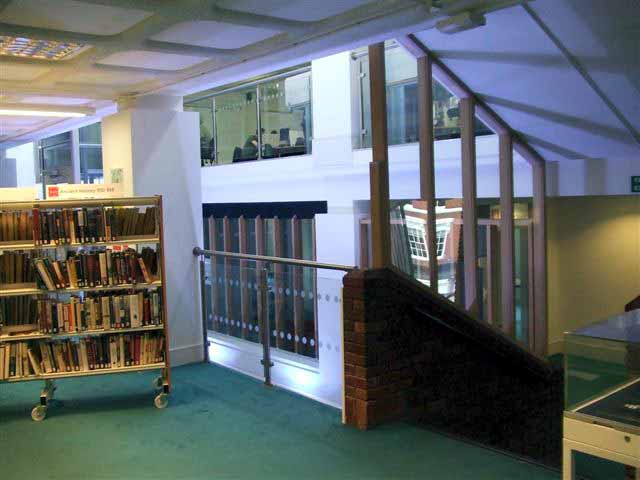 Not all of this would have pleased John Madin, but he would probably have been grateful that his lovingly-designed building was flexible enough to be turned into a new-style library.

There are some critical underlying differences that may explain the different fates of Madin’s two libraries. Birmingham’s library was run by the City Council. As planning authority it could give itself planning permission for a new library and, as building owner, it could decide to demolish the library and have the cleared site commercially redeveloped.

Redditch Library is run by Worcestershire County Council from its headquarters in Worcester, but the planning authority is Redditch Borough Council so no single body can take all the decisions. Commercial pressure on the town centre is unlikely to be great, which is probably the real reason why the future of at least one Madin library looks secure for now. But it’s worth the short journey from Birmingham to Redditch to see how things might have been different.

3 thoughts on “John Madin’s other library”