Today, The Public in West Bromwich welcomed its one millionth visitor. 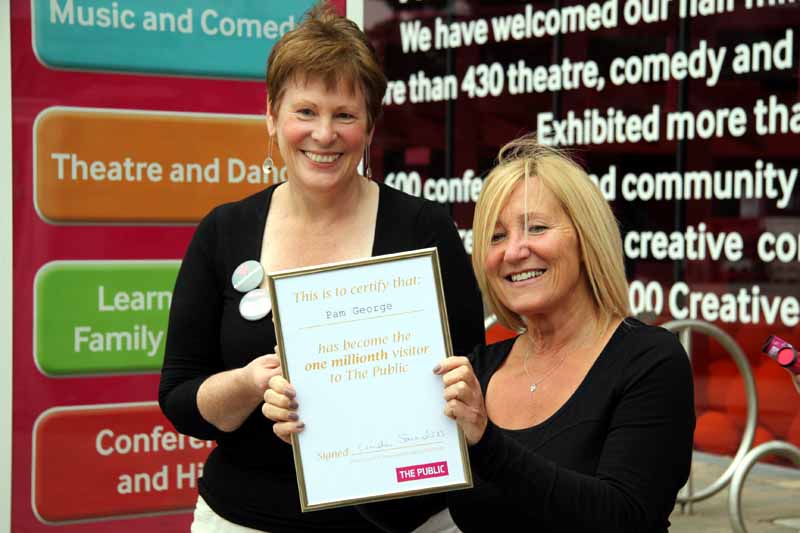 Pam George from Walsall, who works in West Bromwich, today became The Public’s one millionth visitor

The much loved and increasingly popular arts centre, widely used by the whole community, attracts visitors from across Sandwell and further afield.

The Public’s diverse programme has featured everything from well established community events, such as St Patrick’s Day celebrations, through to exciting creative projects featuring international artists working alongside local school children to create cutting edge works of art.  Their highly popular Summer Exhibition receives a growing number of submissions each year, providing local residents with the opportunity to display work alongside famous national and internationally recognised artists, and the venue’s sell out comedy nights draw big names such as Al Murray and Jenny Éclair to West Bromwich.  With an increasingly popular holiday programme for children and families, the venue continually attracts people of all ages and backgrounds.

In addition to this, The Public has become home to 30 organisations – many relocating to Sandwell specifically to be part of the building’s creative hub, creating 120 jobs in the region and generating 200 opportunities for work experience and apprentices.

Pam George from Walsall, who works in West Bromwich, today became The Public’s one millionth visitor when she stepped through the venue’s pink doors.

Pam George said: “I’m absolutely thrilled to be The Public’s one millionth visitor!  I absolutely love the place and visit each Thursday for lunch with friends.   Every time the exhibitions change I make sure I come along, and tell friends all about it.”

Linda Saunders, Managing Director of The Public said: “Our one millionth visitor is a real significant achievement in the history of The Public and comes a few months before our fourth birthday and on the eve of the opening of a major new development in West Bromwich.  Over the last four years we have established a vibrant and creative hub, bringing opportunities to Sandwell and giving local people a focal point and something to be proud of.  Through our work and the work of our partners, we provide something for all ages and have firmly established ourselves as part of the makeup of the community.”