A theatre company formed by performing arts students at Coventry University is premiering an English adaptation of an established Romanian play in the city at the end of the month. 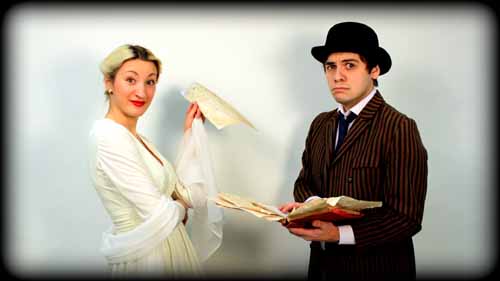 The company’s English version of Romanian playwright Mihail Sebastian’s Steaua Fara Nume (The Star Without a Name) is being presented for the very first time as part of the University’s forthcoming Performing Arts Festival, Spectrum 2013.

The festival forms part of Coventry School of Art and Design’s Degree Show 2013, which is set to exhibit the original work of the UK’s next generation of creative talent over several weeks at various city venues from Thursday 25 April.

Final year undergraduates in visual arts, design, music, fashion, dance, drama, media production and photography will be showcasing their work to the public at different locations across the city centre campus and at selected venues in London.

Tavo Theatre Company’s play, which has been translated by their Artistic Director Ioana Maxim, depicts the life of a small town in 1930s Eastern Europe, where high-speed trains don’t stop and nothing out of the ordinary ever happens. Its inhabitants, with their petty preoccupations and constant gossip, dream of something that will completely shake their existence and throw them out of their mediocrity.

Mixing philosophical debates with scenes of great comic value and revolving around the brief romance that sparks between an upper-class belle and an astrology teacher, Stars Never Abandon Their Orbit talks about people from different worlds and whether they are able to overcome their anxieties and fulfil their dreams.

Sad, yet ultimately optimistic, Sebastian’s play explores everyday life in a provincial town and speculates on a man’s place in the cosmos with the assistance of an imaginary canopy of stars.

The play is close to the heart of Artistic Director Ioana Maxim. Originally from Romania, Ioana who is currently in her final year at Coventry University is an emerging freelance director and actress, with experience in small-scale performances and theatre for young people.

Ioana has previously directed two plays for youngsters, which won Best Director and Best Performance among other awards at student drama festivals in Bucharest. She is delighted to be presenting the work of one of her home country’s most renowned playwrights to English audiences for the first time.

Ioana said: “Due to my heritage, I felt particularly drawn towards the idea of promoting Romanian theatre in the UK. In fact, the production team at Tavo Theatre Company all share a common Eastern European background so we’re excited about giving theatre goers here a taste of our cultural heritage, which is something they might not know a great deal about.

“Steaua Fara Nume is a celebrated Romanian play but our adaptation is being presented in English for the very first time. I’ve altered the title slightly from the literal translation as I think  ‘Stars Never Abandon Their Orbit’, which is an actual line in the translated script, captures perfectly the essence of the piece but otherwise it is the original version of the play in as much as a translation from one language to another allows.

“I’ve kept the Romanian names of the characters, towns and so on and stayed true to the time and place indicated in the text as I wanted to remain as faithful as possible to the Eastern European spirit of the play.

“But in choosing this particular play, with its universal themes and comic undercurrent, our aim is to demonstrate how much certain countries have in common rather than how much separates them so we hope our production will appeal to a broad audience.”

The performance of Stars Never Abandon Their Orbit will take place at 7.30pm on Tuesday 30 April 2013 in the Ellen Terry Building, Jordan Well, Coventry CV1 5RW. Tickets which cost £5 (£3 concessions) are available and can be booked online at the company’s website www.tavotheatre.com.