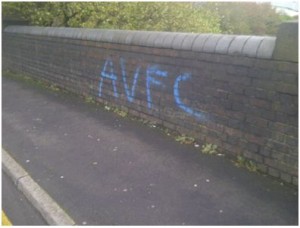 There’s not much you can say about the past week, because not much happened. Villa should have been playing in the FA Cup, but being unable to hang on to the lead or even for a draw against Millwall in the previous round put paid to that. Millwall subsequently ended up being drawn against non-league Luton Town (a phrase which still seems odd), went through with little trouble and now have Blackburn at home in the quarter-finals. The road to Wembley is open. In fact, it couldn’t have been easier.

Talking of which, Villa are at Arsenal on Saturday, a game which shouldn’t be taking place because we should be in the following afternoon’s League Cup final. If the FA Cup provided an easy route to Wembley, this one was a downhill, neon-lit and signposted journey by chauffeur-driven limousine along a deserted motorway. Whatever honours Villa might win in the future, the total will always be one less than it should have been. Paul Lambert should be forced to watch this match on TV in the sort of eyelids-wide-open contraption used on Alex in A Clockwork Orange, then when the winners are parading around with the trophy Jim Bowen should burst into the room shouting “Here’s what you could have won.” Bitter? You bet I am.

Anyway, we’re playing Arsenal, by their standards they’re having a poor season, got knocked out of the FA Cup last week and with Bayern Munich to play in the next round their chances of getting much further in the Champions League are not good. That means they’ll be concentrating on the league, which isn’t a good sign. Still,hope springs eternal and we’ve pulled off a couple of surprise wins at the Emirates in the past. One thing’s for certain – the team, and Paul Lambert, owe us one.