Alan Clawley finds similarities between Birmingham’s ‘modern’ developments and some of those post-war architectural monuments in Europe. 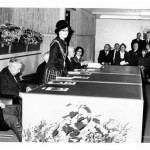 The Council has announced that it’s dumping Artsfest this year in favour of its own festival around the opening of the new Library in Centenary Square. Artsfest cost the Council a mere £120,000 whilst the PR Agency that will run the opening event is charging the Council three times as much for its services. Contrast the monotone austerity of the opening ceremony for the Central Library presided over by Harold Wilson in 1974.

Now Artsfest was by no means perfect but it did enable home-grown arts organisations to show off their wares whilst offering a varied programme of free events for the public to enjoy or not according to their taste. What we are likely to get served up this September instead will be chosen by the Council to promote themselves and their ambitious Library of Birmingham. I wonder what the people of Birmingham would have said if they had been given a choice between making do with and extending the existing library and keeping Artsfest or spending £193 million on a new building and thousands more on an opening ceremony? 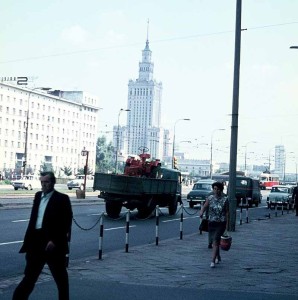 We will be told by the Council what ‘culture’ is in no less strident and top-down way than the Communist Party of the former Soviet Union did when it donated its Palaces of Culture to satellite republics such as Poland. My photo of the Warsaw Palace of Culture was taken in 1971 when I toured Eastern Europe under Communist rule. The outside of the building was imposing and memorable from street level, but for the life of me I cannot recall anything of interest that I saw inside it.  Its biggest attraction for tourists like me was the view of Warsaw from the top.

The parallels between the Soviet Palace of Culture and the Library of Birmingham are striking. They are both much bigger and higher than they need be for the function they serve. They are both referred to as ‘palaces’. During the early stages of library design the architect vowed to build a ‘welcoming people’s palace’ (Birmingham Post 6 August 2008). The new library would be the third ‘palazzo’ facing onto Centenary Square. The ‘stunning’ views of the city from the library, both through the cage of intersecting metal circles, and from the roof gardens facing Centenary Square were cited as outstanding features that were not present in the either of its predecessors. 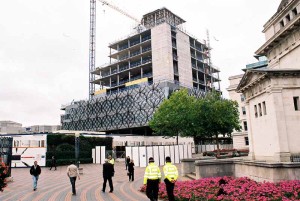 The new library has yet to prove that it will give the thousands of tourists who are expected to flood through its doors a truly memorable cultural experience. No doubt the opening celebrations will take place in front of the building, in Centenary Square or in the circular hole in the ground fondly called ‘The Amphitheatre’.

The history of publicly-funded over-ambitious artificially-created cultural projects, such as the Millennium Dome, West Bromwich’s ‘The Public’ and Paris’s Pompidou Centre is not promising. It was well known that most visitors to the Pompidou Centre just rode the escalators without visiting the art galleries inside it. The instigators of such projects concentrated too much on creating iconic buildings and too little on what was to happen inside them. They have since had to struggle to recover from their mistake and to fill the buildings with activities that can fulfil their owners’ expectations and justify the huge capital cost.

One thought on “State-sponsored culture”