From 26 Feb to 2 March, Coventry’s Belgrade Theatre will welcome Pauline Quirke, Linda Robson and Lesley Joseph to the Main Stage to launch the second tour of the hugely successful stage adaptation of the hit BBC comedy Birds of a Feather. 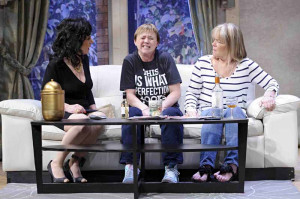 Birds of a Feather ran on the BBC for nearly ten years throughout the 1990s and it became a massive hit right from the word go. It remains not only a classic comedy, but also, as a female-centred long-running series, a truly rare gem.

This is a brand-new show created especially for the theatre by The Comedy Theatre Company, who have also produced the highly successful tour of Victoria Wood’s dinnerladies which visited the Belgrade back in 2009.

Birds of a Feather was originally created by writers Lawrence Marks and Maurice Gran. Not only are they known for a variety of great shows both on the TV and stage over the past thirty years, they also wrote the hugely successful Dreamboats and Petticoats, which has visited the Belgrade on a couple of occasions, most recently in 2011.

Linda Robson’s visit to the theatre follows her hugely successful stint on I’m a Celebrity Get Me Out of Here and Lesley Joseph will be making a welcome return to the Belgrade following her recent visit with sell-out show Calendar Girls.

In 2008 Pauline Quirke celebrated 40 years in the entertainment business and launched the hugely successful Pauline Quirke Academy of Performing Arts, with over 30 academies across the United Kingdom, including one in Coventry.