On the day when the Office for National Statistics revealed that in the 2011 Census, driving was the most common form of commuting to work – used by 15.3 million people (57.5 per cent of the working population) –  Laurence Inman so wishes it could all be different. 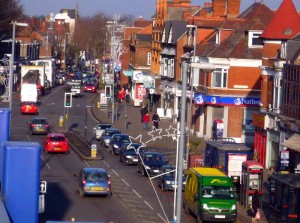 All of us, looking back on things, can easily isolate wrong decisions: incidents we might have avoided, friendships we wouldn’t have encouraged, harmful habits we now see can bring us nothing but unease, regret and death.

Smoking was a big one. I deliberately trained myself to tolerate breathing in a noxious mixture of chemicals, because my mates (at least two of whom are now dead-by-fags) told me to. They were told to by evil advertisers, who presented this slow suicide as something cool. And it all started with a few greedy men who grew a useless weed and then found there was a very good use for it; it would make them hugely rich and they could spend a lot of money on things they didn’t need.

The opening scenes of There Will Be Blood always make me think: this was where it all could have been stopped.

If we could have looked forward from that point and seen what oil was going to deliver for us, for our surroundings and for the stability of the world, we would have paused at least.

But the world is not run by far-sighted Philosopher-Kings of the kind Plato yearned for. It is run by grubby, disgusting vermin who can’t see farther ahead than their own lunchtime. They have the money and so can make the rules. They can finance huge election campaigns. They can manipulate our minds, so that we regard being car-less as a huge disadvantage in life.

Everywhere we step in our cities we are in danger. We breathe in foul invisible discharges. Our townscapes are made grimy and ugly.

All this, and for so little in return! Most car-slaves, I suspect, have a car because the prospect of a half-hour bus-ride home, having to sit next to common people, is distasteful. So they are content to accept the monstrous expense and hideousness of the car-network to avoid this tiny thing. They are happy to pay a big proportion of their incomes on it! Most car journeys could easily be made, by most people, on a bike. If we had taken that route a hundred years ago, no sane person now would change it for what we have now.

I am reminded of this folly and horror every day. So are most people who use Kings Heath High Street.

Leaning against a lamp-post outside Asda is a bike painted white. There are often flowers as well. Messages and photographs. This is where Hope Fennell was killed by a lorry in November 2011. Her life had hardly begun.

I didn’t know her, just as I didn’t know any of the other millions who have been killed in ‘accidents’ on ‘dangerous roads’ by cars and lorries over the last century. But hers is the death I am confronted with every day, and I have to ask: can anything we, as a society, might have gained from this ‘advance’ outweigh the press of grief and despair it has dragged along with it?

2 thoughts on “Driven to despair”