There were two important Chamberlains living in Birmingham during the second half of the nineteenth century.

We all know about Joe: industrialist, politician, a man for whom the word ‘controversial’ might have been invented. He could have been buried in Westminster Abbey but chose instead Key Hill Cemetery in the Jewellery Quarter.

The other was John Henry Chamberlain, the architect. 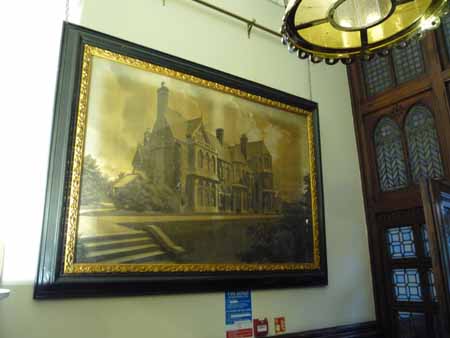 They were not related, but their paths crossed at many points during their lives. John designed Joe’s memorial in Chamberlain Square (now universally referred to as ‘the fountain’.)  There used to be a smaller canopy where the statue of Joseph Priestley used to live. This was destroyed in a pointless act of civic vandalism on the order of the council in 1955. He also designed Joe’s mansion, Highbury, in Kings Heath. Most people agree that this is a bit of a pile, but it at least has the merit of reflecting the personality of its owner.

John was originally from Leicester. His first big job here was in 1857, a private house in Ampton Road, Edgbaston. Venetian Gothic of the kind that Ruskin lauded in The Seven Lamps Of Architecture, was too much for many Brummies, and he didn’t work for some years afterwards. In 1864 he joined up with William Martin. Together they built the Longbridge Pumping Station in 1870, not just a beautiful structure, but also an emblem for the Civic Gospel of Birmingham, of which Joe was the leading evangelist. 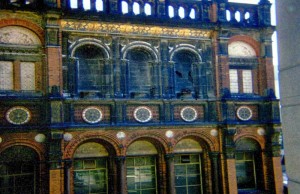 Looking SSW to the façade of the 1879 Lombardic library Extension designed by by J H Chamberlain from the new library concourse.

The next masterpiece of theirs was the Central Library in Radcliffe Place, adjoining the Birmingham and Midland Institute. This was all demolished in the 60s to make way for a bit of road which helps you get to Wolverhampton a minute quicker and a patch of grass nobody can reach. To the shades of the bastards who allowed this to happen I say this: you are bastards.

Martin and Chamberlain built more than forty Board Schools around the city. These were direct beneficiaries of the 1870 Education Act. Probably the best is the one in Icknield Street, Hockley. It might be worth having a look before the road-maniacs get an idea to smash it down; after all, we always need more roads.

By the time work began on their supreme achievement, the School of Art in Margaret Street, John had been chosen as trustee of St George’s Guild, by Ruskin himself. To anyone interested in nineteenth century architecture, this is the same as saying he was touched by God.

He died in 1883, two years before its completion.

I mention all this because I was in there last Friday, working with some brilliant students on a film. They used the central staircase; I was dressed up as a butler and hobbled up and down it a few times. I gazed in wonder at the unequal gabled wings, allowing an unbroken northern light onto the top floor studios.

I love these occasions. There’s no money, but that makes it better. Money ruins everything. I do it just to have the opportunity to do good work and to try to get better at it. Most of all, it’s a joy to work with idealistic people who really believe that an artistic enterprise is worth doing, in and of itself. They were lovely. I hope I was that enthusiastic when I was their age, but it’s getting difficult to remember!

Look them up on Eyeball Films. They are intent on doing well in a field which promises very little in the way of worldly success and reward. I applaud them for it. I praise them for subverting, in their own way, the thought-currency of this (and John Chamberlain’s) age: that all effort must contribute to ‘growth’ and ‘progess’ . In other words: money.