A Royal Navy Lynx helicopter and her crew from 815 Naval Air Squadron will help bring a sense of perspective to this year’s Scale ModelWorld exhibition at the Telford International Centre on November 10 and 11. 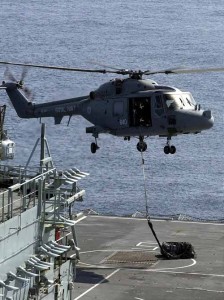 The Lynx helicopter – which is used operationally around the world by the Royal Navy and in particular is embarked on ships – will be flying into Telford International Centre and landing in the car park on Friday, November 9 before being wheeled inside the hall, where it will be on display all weekend, with the 815 crew on hand to answer questions about life in the Fleet Air Arm.

For those with the new Airfix kit, you are unlikely to have a better chance of checking it against the real thing!

The attendance of the Lynx has been made possible by Airfix, who negotiated with the Royal Navy and are sponsoring the helicopter’s attendance at the show.