Coventry’s Belgrade Theatre is once again showcasing some of the regions up and coming writing talent in The New Black Showcase – RAW, which features readings of scenes from new plays written by some of the region’s newest voices. 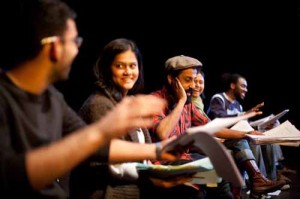 The writers that will feature in The New Black Showcase – RAW have all recently graduated from the Critical Mass programme, a script writing course for Black and Minority Ethnic communities run by the Belgrade Theatre, based on an initiative run in previous years in association with The Drum, Birmingham, Britain’s only black arts centre, and the Royal Court Theatre in London, the country’s leading new writing venue.

This will be the participant’s first opportunity to see excerpts of plays they are working on performed in front of a live audience by a company of professional actors.

Now in its third year, The New Black Showcase will include readings of work by Kemoh Tarawali, whose play focuses on the experience of a young black man ‘coming out’ to his family and Harbir Nagra who tackles the very pertinent issue of  unemployment – in this instance within a South Asian community. Orla O’Connor’s story highlights the experiences of three Irish women following the death of their controlling mother and the discovery of a family secret; and Maeve Clarke has written a tale set in Jamaica and the UK about the unsettling habits of the mysterious Jackanooni.

Justine Themen, Associate Director Community & Education said: “We are delighted to once again be hosting a showcase of work that opens another window on the experiences of the extraordinarily diverse communities of Coventry and beyond. The evening will be a very varied one – with humour, poignancy and suspense following fast on each other’s heels, all in the space of just one hour. A great start to a weekend out on the town.”

The Belgrade Community & Education Company runs a targeted programme of work that aims to engage the city’s Black and Minority Ethnic communities and is committed to continuing to open up communication between diverse communities. In recent years its efforts have been recognised with a nomination for a Coventry Community Cohesion Award and a commendation for its work promoting intercultural dialogue from the panel at the Awards for Bridging Cultures.

Taking place on On Friday 16 and Saturday 17 November tickets for The New Black Showcase – RAW are free. However, the theatre will ask for a donation at the end of the performance. All proceeds will go towards supporting the Belgrade’s ongoing work within the local community, which is carried out by the Belgrade Community & Education Company.

Although tickets for The New Black Showcase – RAW are free, booking is still advised by calling the Belgrade’s Box Office on 024 7655 3055 or going online at www.belgrade.co.uk.