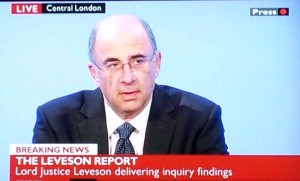 Back in 1991, pre-net, pre-blog, pre-everything really,  politician David Mellor warned the media:  ‘ The popular press is drinking at the Last Chance Saloon.’

Well, zoom forward 21 years and the reptiles are still sipping the best cognac  from behind the bar despite a bust up or two.

Nothing really improved in that period. It worsened.

But now, The Leveson Inquiry has spoken after an 8 month investigation. Its thoughts swirl all around us in Britain as the findings  point to an independent regulatory body backed  by law to control the worst excesses of the demented British tabloid papers.

But will a new muscled-up statutory panel, with or without the law behind it, really work?

The Leveson Inquiry has, it is accepted,  put the deranged element of the UK media on its backlegs for a while…until…until.. the next time  vomit encrusted news executives let slip the dogs of the newsroom and cry it is in the ‘public interest.’

Simply put, no self regulatory body will ever control a media owned by magnates who see only  the £ sign when it comes to the moneymaking tabloid world. They  will temporarily stop sipping at the Last Chance Saloon until they need another gulp of the harder stuff and take a peek over their accountants’  shoulders.

The papers  simply won’t regulate themselves. They won’t. As one commentator said last night:  ‘It is like asking a schoolboy to mark his own homework.’

The law, you see, is there:  you only have to point out  that on the same day that the Leveson findings were being chewed over, both Andy Coulson (former Downing Street PR man and News of the World editor) and  Rebekah Brooks (former Murdoch hired gun) were both in front of a court once again, this time  over illegal police bribes.

What Leveson will do, as did seven other media reviews, is to raise the lid once again on who we are.

Thomas Paine, an 18th century pampleteer, wrote: A free press is the collective mind of a nation.’  If that is true  ( and you only have to look at the ramblings of social media sites to get a glimpse of that),  then the tabloids and their criminal legions will remain and fester until the demand  disappears.

And staying with Paine, if the free press is our collective mind, then it was the press (both in the UK and the US) that unveiled the Fleet Street phone hacking scandal and banged on about it until the politicians and the lazy corrupt  police finally did something about it.

Now, it is one thing to harp on and another thing to offer a solution. Here is mine and I hope it raises debate:

Forget limpid regulatory bodies that slap a wrist or two. Leveson, after all, called for fines of only up to £1m for transgressions.

If a paper is found guilty of a crime, really hit the media bosses hard. They only think about money, after all. That’s their soft underbelly.   Stories are not, for them, ‘in the public interest’ but simply what sells and fills spaces between the ads.

Fine them hard: £10m, £20m, £50m for illegal acts,  closure of a paper for six months if found to be a criminal organisation that invades privacy, abuses technology or hounds individuals illegally. Jail, not for their cruddy  shock troops but for these millionaires who allow their papers  to break the law.

Eighteen months ago, on this site,  I called for the News of the World to be shut. It was ultimately closed by Murdoch. Not, of course, because of my article. And not because of any high moral purpose. But because he knew the advertising base  was dead in the water following  the hacking scandal.

The tabloid owners need this financial stab in their  rotten hearts.  That’s the language this amoral mob understands. They understand money. They’ll ignore  another regulatory panel that will, ultimately and sadly, lose control of the game…and find itself  serving drinks at the Last Chance Saloon.