Pupils were shown the works in a pioneering project aimed at making engineering come to life. 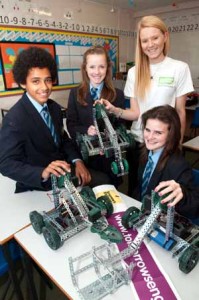 They enjoyed a theatre-style performance of the Engineering X Factor alongside a series of hands-on workshops where they learned about the amazing and varied careers in engineering.

Justine Rumsey, assistant head teacher said it was the first event of its kind at the school and had been a huge success among pupils.

“Tomorrow’s Engineers is about inspiring the next generation of engineers and making students realise engineering impacts on so many industries, from music and mechanics to manufacturing and motoring,” she said.

Tomorrow’s Engineers ambassadors held a series of hands-on workshops where students worked with robots, learned how to crack codes and challenge typical stereotypes around engineering.

Phoebe Ash, 13, said: “The workshops have been really good fun and I have learned much more about the options open to me for getting a career in engineering.”

The pilot project held at the Tynings Lane school was run by Tomorrow’s Engineers a scheme led by Engineering UK and The Royal Academy of Engineering with support from The Lloyd’s Register Educational Trust and others.