The two-part series entitled Women at the Top investigates why so few women reach the upper echelon in business, and challenges Ms Devey’s preconception that women don’t try hard enough. It explores her belief that it is not a glass ceiling preventing women from making it to the pinnacle, but women themselves. 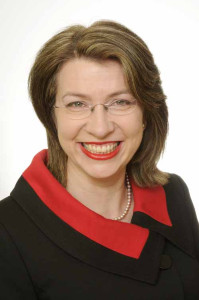 As academic advisor to the show, Rosalind Searle – professor of organisational behaviour and psychology at the University’s Business School – helped to develop ideas and topics for the series to examine the realities faced by women in the male-dominated British business world.

Rosalind’s input included investigating areas such as the genderisation of organisations and job adverts, current maternity leave practices, the cost of UK childcare and women’s communication and leadership styles – each of which are presented to challenge Ms Devey and business leaders to think again about the obstacles faced by women in the workplace and the consequent loss of significant talent from organisations.

Along the way studies were made into how companies such as Proctor and Gamble viewed their female workforce, and the real reasons why women leave their roles. The documentary also looks at how various organisations – Ford and BT, for example – are making themselves more family friendly by creating more flexible working arrangements.

Rosalind also played a key part in the creation of a web-based game – the ‘Boardroom Lottery’ challenge – to support the show. The game, which is hosted by the Open University, assesses a person’s chances of reaching the top of the career ladder based on their gender, age and ethnic group, amongst other things.

Professor Searle said:  “The diversity of boards in the UK is a very important issue, and it is vital that all available talent – rather than just one traditionally privileged group – is leading our organisations.

“Being part of these programmes was a great experience and challenging Hilary’s presumptions shows the barriers women need to get through to achieve board roles. All the evidence demonstrates that women are not less risky than their male counterparts, and promotes more transparent organisations; all they lack are opportunities and confidence.”

To coincide with the BBC programme’s transmission, Professor Searle has also organised two conferences sponsored by Coventry University and the British Psychological Society’s Division of Occupational Psychology (DOP) which will look at the progress being made by boards of FTSE 100 companies in achieving their aim of 25% female representation by 2015 (‘Women on boards’, February 2011).

The first conference takes place at the University’s London Campus on Thursday 6th September, and will feature talks from a wide range of international academics and practitioners to provide an insight into attracting and developing talent, and how diversity at the top of organisations can have wider positive impact.

A second aligned event will take place at Coventry University’s TechnoCentre on Friday 7th September, where three leading UK and international speakers will take a fresh look at the critical issue of how to achieve better gender balance at the top of organisations.