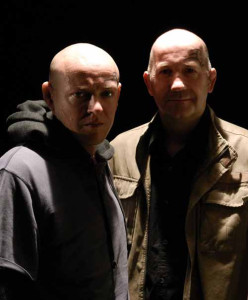 Over the course of the play the central character, ‘One’, slowly reveals the story of his troubled past. In a lifelong quest to overcome his inner demons he’s educated himself and explored the religions of the world, but still he can’t find peace. With nobody left to turn to this deeply troubled man communicates his feelings to a solitary tape recorder in a bid to find salvation.

Writer Geoff Thompson was born and bred in Coventry. Until the age of thirty he had worked through a plethora of menial jobs – glass collector, floor sweeper and a decade as a nightclub bouncer. Convinced that there must be more to life, Geoff decided to become a martial arts instructor then followed this by living out his dream of becoming a writer.

On Fragile he said, “I have always wanted to tell this story but until now I have been too scared to. But this story would never let me go until I gave it new life on the page. My hope is that, in bringing light to some of my own dark places, I might encourage others to take courage and do the same.”

Geoff Thompson’s acclaimed writing includes over 40 books that have been published in 21 languages, including the best selling autobiography Watch My Back. He has also written screenplays for five multi-award-winning films, including the BAFTA winner Brown Paper Bag, BAFTA nominated Bouncer starring Ray Winstone, full length feature film Clubbed and Romans 12:20. Fragile is his third stage play after Doorman and 3 Sacks Full of Hats.

Fragile will be directed by Nick Bagnall, who said, “Fragile is challenging and dangerous as well as being extraordinary in its poetry and theatricality. As a new play it deals with a domestic situation in epic proportions. Geoff is an incredible writer and being a Coventry lad, it makes perfect sense to do Fragile here at the Belgrade.”

Fragile is a one-man show starring Craig Conway, who previously played the lead in one of Geoff’s award-winning short films, Romans 12:20. He returns to Coventry after living in the city while studying performing arts at Coventry University. He went on to forge a successful career as an actor on stage, screen and television, performing and filming across the UK and internationally.

He has appeared on stage at Leicester Haymarket as Les in Berkoff’s East and he also played the title role in Macbeth, a role for which he won he won best actor at the Leicester Mercury awards. He also starred in the award-winning production Car, which was written by Coventry’s very own Chris O’Connell of Theatre Absolute. Aside from the stage he has also acted in a number of hit films including The Descent, Dog Soldiers and Mike Leigh’s Vera Drake.

With strong language and themes of an adult nature throughout, Fragile is suitable for adult audiences only.

Tickets for Fragile are available now from the Belgrade’s box office on 024 7655 3055 priced from £8.50 to £15 or via www.belgrade.co.uk where cheaper tickets can be purchased.