Leading Coventry business recovery specialist, Cranfield, is inspiring other local companies to come together to support the regions involvement in the London 2012 Olympic Games. 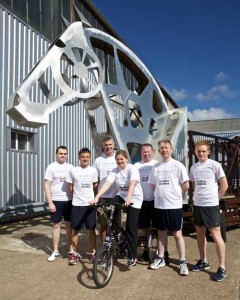 As the first Gold Patron of Godiva Awakes, which represents the regions involvement in the Games, Cranfield is sending the message that the event represents much more for the future of business within the Midlands than just being a creative Olympic project.

Godiva Awakes sees a mechanically engineered six-metre animated Lady Godiva puppet, powered by 100 cyclists on a Cyclopaedia designed and manufactured by local businesses, on her seven-day journey from Coventry to London, accompanied by a carnival of over 220 dancers and performers.

Cranfield’s managing director, Tony Mitchell was recently invited to the maiden unveiling of Godiva’s luxurious coat, which will cover the puppet. Within the lining of the coat each of the ten patrons will have their own embroidered panel. After Godiva’s procession to London, the coat will be on display in Coventry Cathedral following the Olympics.

Cranfield initially became a patron of the project in November 2011 after Tony Mitchell and fellow director Patrick Murtagh attended an event when the project was announced – Gold Patrons were invited to support it. The event involved travelling in a vintage bus from the Coventry Transport Museum to a secret location in Coventry to see Godiva take her first steps in public.  This sparked a keen interest from Tony and Patrick, who could see the potential for this ambitious project to symbolise regeneration of the various industries throughout the region.

Tony Mitchell said: “We are keen supporters of this project as we have witnessed the passionate drive of the team behind it. It is an amazing opportunity to bring the Coventry business community together and will definitely help to put pride back into our city.”

Godiva Awakes is the brainchild of Imagineer Productions and, although it is Olympiad-themed, it represents much more for the Midlands by symbolising a new spirit for regeneration; especially in the manufacturing sector. Godiva’s extravagant coat depicts a diverse range of sectors that have long been represented throughout the region in manufacturing, engineering, transport, watchmaking, glass-making, chain-making and video and digital games.

Jane Hytch from Imagineer Productions said: “We were extremely happy that Cranfield were the first to become patrons of the Godiva Awakes project. Having such a well-regarded Coventry business take the first step I’m sure inspired other businesses to follow suit. It was always our intention for this to be more than just a creative project and from the outset we wanted Godiva to by a symbolic representation of all that is great in the Midlands, and our proud industrial heritage.”

The Cranfield team have also been invited by the project to join the carnival procession as Godiva is awakened in her opening ceremony on 28th July in Coventry, for which thousands of tickets sold out within the first hour.