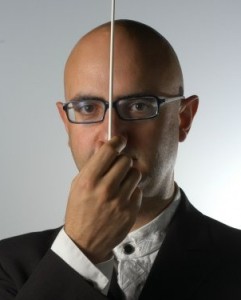 Conductor Paul McGrath- on the box

From Our Arts Desk

Two classical conductors will take to the podium with more than music on their minds.

Both Paul McGrath and Michael Rosewall lead English Touring Opera musicians through Barber of Seville and Eugene Onegin for the next two weeks in both University of Warwick and Cheltenham’s Everyman Theatre.

But certainly etched into their minds as they conduct the orchestra are their appearances – already filmed for the BBC- on  the competition reality show Maestro at the Opera.

They appear as expert mentors. Paul oversees the attempt by mathematician Marcus du Sautoy to pick up a baton. Michael mentors dancer Craig Revel Horwood as a trainee conductor

The tv show starts tomorrow (Fri, May 4) on BBC2. As highly experienced professional opera conductors, Paul and Michael will be responsible for teaching and guiding the contestants through the world of opera with all its pitfalls and high drama on and off stage.

Paul McGrath said: ‘It was very interesting to be able to participate in a series which shows what opera conductors actually do. It’s been great working with my fabulous celeb student Marcus du Sautoy.’