Dave Woodhall on the mayoral verdict and the headline we’ve been dying to use since we started.

Now that the fun has died down and the mayoral debate is over until the next time, we can look back and reflect on what was an extraordinary feat in local politics. 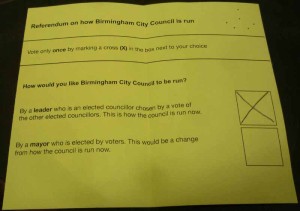 Given that those in favour of an elected mayor began from a position of strength, (as late as March 9th an opinion poll for Radio WM suggested that 54% of those questioned wanted an elected mayor), could afford to run a full-time campaign and had the resources to hire the Town Hall for a rally while the organised opposition seemed to consist of an outdated website and a frankly ridiculous leaflet; bearing in mind that they were backed by the two major political parties, the Chamber of Commerce and the Birmingham Mail, with the BBC scarcely bothering to hide their support. Taking all this into consideration, how the hell did the ‘YES’ campaign manage to lose, and by such a majority that if that poll was correct almost a third of their vote disappeared in less than two months?

While it would be nice to think that The Birmingham Press played it’s part in the final result, I believe there were two main reasons why the people of Birmingham voted against the idea of an elected mayor – at least for the moment.  The first is the affront to democracy that the post would entail. As the campaign wore on, it became clear that a mayor could set budgets and effectively rule with a bare third of the council voting in favour. The extent of their powers being unknown until the identity of the successful candidate became clear was also a factor, and one for which the ‘YES’ campaigners had no credible argument.

The second factor was, I like to think, down to sheer bloody-mindedness. The more we were patronisingly told that to vote ‘NO’ was to admit we couldn’t be trusted to control our own destinies, the more determined I was to make sure I did just that. Nobody tells me my opinion is born out of fear and lack of political awareness. Others may have felt the same. 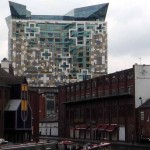 And so the result was announced, and I’m sure it came as a shock to many of those present during the ‘celebration’ party at Marco Pierre White’s Steakhouse & Grille in The Cube organised by ‘YES’ campaigners confident of victory. I wonder if humble pie was on the menu along with the champagne?

The battle may have been won but I won’t be at all surprised if the war rages on. The government wants elected mayors for the major cities, despite opposition from their own grass roots – the ‘NO’ campaign was joint-led by Conservative councillor James Hutchings. In a couple of years we could find another referendum mooted, this time with the contentious areas of power and budgetary approval answered. To defeat the idea for a second time would therefore be much more difficult. 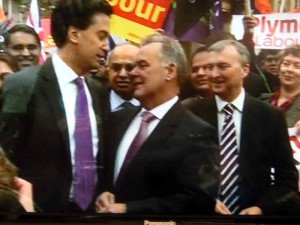 In the meantime, the new Labour administration has to show that an elected mayor is unnecessary by providing leadership and once more making Birmingham a city perceived as progressive and attractive to outside investment, both from national government and the private sector. Having the six local authorities in the West Midlands speaking with one voice rather than squabbling amongst themselves will be a start. After all, they are supposedly on the same side.