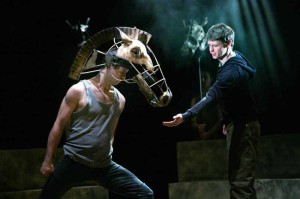 Inspired by a true story, Peter Shaffer’s unique psychological thriller explores the complex relationships between worship, myth and sexuality. The story follows seventeen-year-old Alan Strang who is sent to a secure psychiatric hospital after blinding six horses with a metal spike.

Martin Dysart, the child psychiatrist assigned to him, begins to probe Alan’s past in an attempt to understand his motives.  Initially the boy is silent and uncooperative, but as Dysart digs deeper, he gradually gains Alan’s trust and the truth begins to emerge.  As Alan struggles to be free of his demons, he must first relive the events of that terrible night.

Originally staged at the National Theatre, London, in 1973, Equus then went onto the screen in 1977 starring Richard Burton, Jenny Agutter and Peter Firth. In 2007, the play was revived in the West End in a critically acclaimed production, starring Harry Potter’s Daniel Radcliffe and Richard Griffiths.

The play is now touring the UK with a new cast of actors, including Matthew Pattimore and Malcolm James, who are both originally from the West Midlands.

Equus is produced by London Classic Theatre, a company renowned for touring challenging yet accessible works of theatre. They are led by director Michael Cabot, who has overseen the company’s transition from one of the success stories of the London Fringe to one of the UK’s most prolific and thriving touring companies. The company returns to the Belgrade after its last visit in 2009 with their critically acclaimed production of The Beauty Queen of Leenane.

Cheaper tickets can be purchased from the Belgrade’s website.