Media Production students from Coventry University have set themselves the ultimate movie-making challenge of creating a crowd-funded, full-length feature film to be shot on location in the UK and in California. 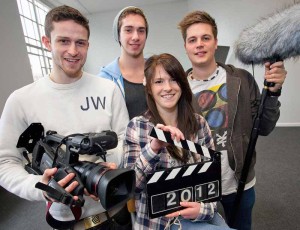 The students are seeking the support of fans and followers around the world to help finance the project through ‘crowd-funding’, and have already raised over £1,300 towards their £7,000 target – but they need more help.

Latitude: The Movie follows the lives of two gadget fanatics, Max and Percy, whose love of ‘geocaching’ – a modern day treasure hunting game in which players use GPS to track down containers hidden across the globe – leads them into a high-tech game of cat and mouse across America in a quest to find the ultimate piece of technology.

The team behind the production describe it as a ‘Lord of The Rings’ for the Google generation, and are hoping that their innovative approach to funding and distributing the movie will prove as much a hit as the film itself.

Distribution is a key part of movie-making and the students have come up with some innovative ways of marketing the film via the same medium, ‘geocaching’, which is featured in the picture. The students are also filming a documentary recording their experience making the film, which will be posted on the movie’s website.

The movie’s premiere will take place in Coventry in June, at which point the crew is hoping it will become one of the first full length feature films to have been created by students studying on an undergraduate degree.

Mick Le Mare, third year Media Production student at Coventry University and producer of the film, said: “This is the biggest challenge any of us have faced whilst in education, and we couldn’t be more excited. A feature film is an enormous undertaking and the pressure is already mounting to be producing content every day. This isn’t just about making a beautiful piece of film; it’s also about fundraising, distribution, casting, graphic design, scriptwriting, sponsorship and budgeting among many other things. We’re looking at this as a professional venture which is equipping us with the sort of skills which will give us a head start when we’re looking for our first jobs in the industry.”

Pete Woodbridge, lecturer in Open Media at Coventry University and one of the project’s coordinators, said: “Making a feature film on such a low budget is a massive undertaking for all of the students involved, especially considering that we are shooting a large part of it in the USA. This involves them taking their production skills to a whole new professional level, and at the same time gives them the opportunity to develop their entrepreneurial, creative and technical abilities. In today’s competitive media job market, it is projects like this that will get them the attention they deserve.”

The film project is supported by Coventry University’s International Experience and Mobility Scheme (IEMS), which enables students to gain experience of working in a foreign country.