Coventry University awarded £745K to digitise the history of telecommunications in the UK.

Coventry University, in partnership with BT plc and The National Archives (TNA) has been awarded almost £745,000 by major UK funding agency JISC to create a digitised online version of BT’s physical archive, containing much of the information currently held in London. The New Connections: BT e-Archive project will catalogue, digitise and develop a searchable online archive of almost half a million photographs, documents and correspondence preserved by BT over the last 165 years. 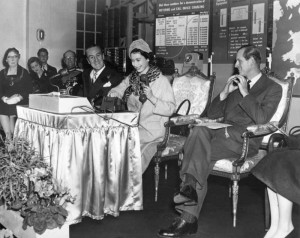 HM Queen Elizabeth II opening the public Subscriber Trunk Dialling (STD) system by making an automatic telephone call to the Provost of Edinburgh from Bristol Telephone Exchange (then the longest distance a call called be dialled without the assistance of an operator), 5 December 1958. Picture courtesy of BT Heritage

BT Archives has been recognised by UNESCO as being of international importance. This remarkable collection details the history of Britain’s leading role in the development of telecommunications and the impact of this technology on society.

The significance of the collection is immense in its scope: in the period covered – from 1846 to the present day; in its range of subjects – including industrial and gender relations in the workplace, advertising, social change, and science and technology; and in its geographical coverage – taking in the whole of the UK including Southern Ireland until 1921 and the Channel Islands until 1973, along with the UK’s communications with countries across the globe.

Examples of documents in BT Archives include arrangements for the telegraphic transmission of Disraeli’s ‘one nation’ speech from Manchester in 1872; details of the installation of the telephone at Buckingham Palace, Sandringham and Windsor Castle from 1892; and documentation of experiments with optical fibres from the 1960s, which led to today’s fibre optics networks.

Examples of photographs stored include the first UK telephone exchange in 1878, the Duke of Edinburgh making an early mobile phone call in 1955, The Queen making the first automatic long distance telephone call from Bristol to Edinburgh in 1958, and early videoconferencing and view phones from the 1960s. 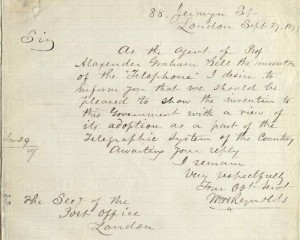 Coventry University’s Director of Research, Professor Neil Forbes, is the New Connections Project Director. He said: “The modern age has been shaped by telecommunications, and the history of Britain’s leading role in the development of this technology and its impact on society is contained in the internationally-important BT Archives.

“This project will enable academic, heritage and digital technology specialists at Coventry University and at BT Heritage to bring their knowledge and expertise to the challenge of opening the collection for academic and public engagement and enjoyment. Coventry University welcomes the opportunity offered by this JISC funding to work with BT and The National Archives to make this collection accessible to all.”

David Hay, Head of Heritage for BT said: “We are delighted to be working with Coventry University to make BT’s fascinating archives more widely available for research and enjoyment. New Connections is an ambitious and exciting venture that will use our combined technology and expertise to greatly enhance access, learning and preservation of the history of the world’s oldest communications company, and very much in keeping with BT’s published Heritage Policy and BT’s commitment to transform the way people work, play and connect.”

Chris Mumby, Head of Commercial Delivery at The National Archives said: “This is a great opportunity to apply the experience we’ve built up over many years to one of the most respected corporate archives in Britain. Our renowned expertise in creating and preserving digitised records will ensure that this important collection is accessible to more people now and in the future.”

More information on the project and its progress can be found at: www.coventry.ac.uk/newconnections