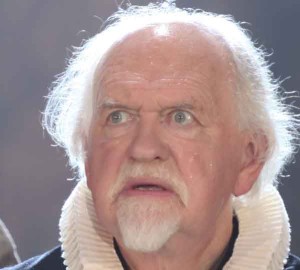 There seemed to be a lot of earnest and  frantic rustling through the programmes just before the curtain went up for Written on The Heart.

Alot of last minute homework to be done.  Alot of cramming.

Do you know your William Tyndale from your Miles Coverdale?  Your Lancelot Andrewes from your John Overall? Or your Douai Rheims New Testament from your Geneva text?

A great deal of ecclesiastical history here in this play by David Edgar about the creation of the King James Bible back in 1611. And a great deal of characters ploughing across the stage setting out their ideological stalls.

And this raises a vital and simple question about going to the theatre: do you sit down in your seat for entertainment or to be enlightened and educated? Is it a good night out or a lesson, in this case, in  vital church history?

After all, though covered with blood and venom back in Jacobean times, today the story is a bit of dusty history in this, our secular era.

So,  writer David Edgar and director Greg Doran set themselves a tough task- a play  beautifully designed and lit about the use of words in a half forgotten world of vying religious sects.

The church powers wanted a new English Bible. But what English? What manner? Whose words? That’s the sense of the play and the playwright ensures you know who are the runners and riders, winners and losers in, this, a play that reminds us what proper toil and emnity shrouded the birth of the new Bible.

The play is heavy with content- if you did your homework, so to speak, before the curtain goes up, you can follow the varying arguments.  And  Edgar, the scrupulous chronicler of this tortuous time,  guarantees you have the full grasp of events.

Stephan Boxer (as Tyndale) gives you an insight into a Tudor man knowing full well the Bible has to be written for the common man. And Oliver Ford Davies (as Lancelot Andrewes, the chief translator) is the thoughtful cleric who ultimately cares about the poor folk who may lose out if a so called ‘majestic’ rendition is agreed rather than the simple poetic one that Tyndale had crafted 70 years before.

So…a play about ideas and the words that encase them. And, in all,  a solid take on  history   if you’re interested in those bloody times that eventually shaped The Church of England.