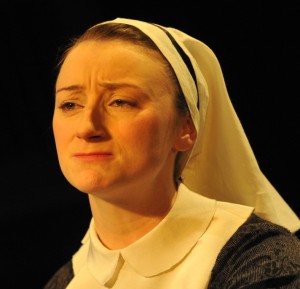 Richard Lutz at the RSC’s Swan Theatre in Stratford

This is a play about, among other things, sex and the law. And these are two forces that are very much still in fashion these days.

The liberal Duke of Vienna decides to retreat under a friar’s cloak  and  retire from the fraught world leaving a puritanical deputy, Angelo, in charge.

Angelo wastes no time. He condemns to death Claudio for impregnating his fiancée.

The imprisoned man’s chaste sister, Isabella, pleads for mercy to Angelo- and Angelo duly falls in lust with her and says…well, you can guess: spend a night with me, sweetheart, and your death row brother walks.

So much for Puritanism.

And therein lies the tale. Isabella, a novice nun, refuses to offer up her chastity. It is too valuable. Her brother must die which, by the way, he is none too happy about. The retiring Duke has to sort it all out.

Shakespeare loved sexual chemistry in his leading roles: Romeo and Juliet or Beatrice and Benedict in other plays spring to mind.

But, unfortunately, there seems little to rub together as dour Angelo and high minded Isabella argue out the moral and physical territory.

She rams home her message in a one note discourse on how she must remain true to herself (and allow Claudio to die) and Angelo stolidly says hit the sack with me and I’ll open the cell door for your condemned brother.

There is no light nor shade in the toe to toe punch up, no nuance. And this is a play about nuances: everyone has a negotiable angle somewhere, everyone has compromise somewhere- most notable in the final scene where Isabella (note: spoiler here)   is offered the Duke’s hand in marriage.

Nevertheless, Jodie McNee, offers an intriguing take as Isabella. She keeps what must be her natural Merseyside twang and that steel tipped edge of the Scouse adds a sharpness, a hardness, to her arguments.

The production, almost bare of scenery, reflects the simple and stark issues that are to be wrestled with. Minor characters are well fleshed out. Paul Chahidi as a duplicitous Lucio in his gold foppish boots comes to mind. As does Raymond Coulthard as the wry Duke who is a deft magician when it comes to sleight of hand trickery.

And, of course, there’s the play itself: produced just about the time that King James ascended the throne following Queen Elizabeth.

Does the fair minded Duke represent the newly crowned monarch? Is dour strait laced hypocrite Angelo (do as I say and not as I do) a  metaphor for the Puritans that Shakespeare has never shown in a good light?

Is, more controversially, proud articulate Isabella, one of the author’s best female roles, a symbol of a simpler England that Shakespeare perceived as the way of the Old Religion that some commentators believe he secretly followed?