British Cycling’s Breeze network has launched a nationwide campaign to close the growing gap between the number of men and women riding a bike for fun. 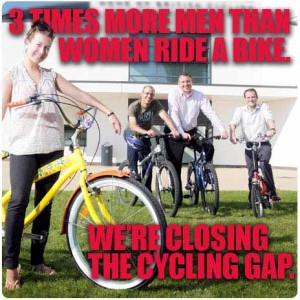 Cycling is growing in popularity in the UK, but this phenomenon is due to more men cycling. The numbers of women riding bikes is shrinking. Right now, three times more men than women ride a bike.

Breeze is the single biggest lottery-funded programme to get more women into riding bikes for fun. In 2011 British Cycling surveyed over 1,000 women to find out what was discouraging them from riding. Results showed that safety concerns, not knowing where to ride, and having no-one to cycle with, were the key barriers to getting involved.

Backed by British Cycling, Breeze aims to help women feel more confident and comfortable on a bike by creating fun, friendly and social opportunities to join informal rides in their local area, as well as offering training and support.

Breeze bike rides have been life-changing for busy mum, Julie Harvey, in Solihull.  The mother of two used to enjoy getting on her bike regularly, but could no longer find time since having children,

She says: ‘Ever since my first Breeze ride, I’ve been hooked. I love everything about Breeze. It’s great to be able to meet up with like-minded ladies and cycle in a safe and supported environment. It makes such a difference to have someone there who is willing to help and knows a bit more about cycling.’

Natalie Justice, Network Manager at British Cycling, said: ‘We know that nearly one million women would like the opportunity to get out on their bikes and socialise with other women but they’re looking for safe routes and someone to go with. We’ve got it. Breeze gives you the chance to have fun, socialise and help change the future of cycling for women.’

For more information about the campaign, or to find a Breeze bike ride in your local area or to find out how to become a Local Breeze Champion, go to www.breezebikerides.com