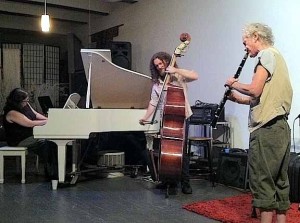 Native New Yorker Perry Robinson is not one of the better-known free improvisers, but his stature is no less significant as a result. Within a certain scene he has accrued importance, his activities stretching back to the early 1960s. This low-key set involved a trio with pianist Diane Moser and bassman Max Johnson, making up a mixed generational spread. They all have connections, but hadn’t played together for quite some time. There was no sheet music in sight, but their improvisations existed within the realms of chamber composition, mostly being of a sensitively harmonious nature.

These three possessed a strong sense of instant composition, masterfully evolving ideas in a gradually linear flow. The small gathering who witnessed this session were gripped by the music’s concentrated aura. I don’t think that this was a subjective illusion. That was the way it appeared. Though the medium-length improvisations were mostly serene, this didn’t impede a recurring mood of thoughtful, introverted tension. All three players were expert at alternating sudden emphatic clumps with contrasting streams of calm flotation. This was particularly apparent as Johnson’s  bruising basslines, fingered with hardness in a gloriously unamplified state, were regularly alternated with groaning bowed stretches. Thus, he established a sequence of percussive bullishness, entering into hovering sustain. Moser, too, initiated sections where she was hammering with gusto, building up rippling blocks. Robinson maintained a superbly articulate clarinet poise, dancing locquaciously, only becoming more fragmented and strident during the closing piece. All three players were completely immersed in the music. Much like their audience. This set’s quieter, introverted methods were all the more poignant when set beside its fleeting outbreaks of aggression.

This was an unusual setting for the august bassman Ron Carter. He’s a player who would be expected to lead his ranks through challenging, or at least mildly innovative regions. Alas, even though this was the third evening of an almost week-long residency, the expanded formation still appeared sketchily organised. The repertoire was extremely predictable, including readings of “Caravan”, “My Funny Valentine” and the slightly less obvious “Con Alma”. Considering that the horn sections included such formidable players as Wayne Escoffery, Steve Wilson and Scott Robinson, their solos were frustratingly brief, with the majority of the action being devoured by pianist Mulgrew Miller, guitarist Russell Malone and the leader himself. Carter offered several stretches of completely unaccompanied lyricism, but it was as though this band couldn’t shake the mentality of a small combo, the environment to which Carter is normally accustomed. Bob Freedman’s arrangements weren’t noticeable for engaging with any structural individuality, dynamism or fine detail. This big band sounded like a temporary extension of a quartet line-up. Further problems were caused by a persistently (and unintentionally) distorting Malone, a rogue outbreak in a club which is usually remarkable for its cosseted acoustics and plush sonic balance.

Dave Liebman was running a very different big band, bristling in the opposite position to Carter’s approach. Here, the emphasis was on originality, with a selection of material that traversed the extremes from relatively swingin’ to the far-out realms of cosmic minimalism. This was particularly noticeable when experienced within the conventional jazz club setting of Birdland. Some of Liebman’s music was more suited to a bright white loft, or a Brooklyn dive bar backroom situation. This imbued its more extreme interludes with a peculiar power, clearly unsettling some of the customers who probably didn’t know what to expect. Then again, Liebman’s range is so broad that they could perhaps be forgiven. Even a seasoned acolyte might have been surprised by the frequent contrasts in dramatic shading.

The week’s run at Birdland was in celebration of Liebman’s 65th birthday, and it was invigorating to witness this player in a state of restlessly investigative forward motion. He is emphatically not interested in complacency. Liebman’s body language revealed a man who was completely in control, but the actual promptings were being given by altoman and musical director Gunnar Mossblad, utilising a vocabulary of complex finger-counting signals. So compulsive were these, that the distracted folks at the table in front of this reviewer were amusing themselves by mimicking the digit directions, setting up their own form of instantaneous communication. Well, at least they weren’t breaking the quiet policy rules. This was fortunate indeed, once Liebman entered his most extreme passage, a virtually unaccompanied solo on the wooden flute. This held all the more force when followed by some massively dense horn section charges, brightly ornamented by keyboardist Jim Ridl and guitarist Vic Juris. At which other jazz set in town could we have heard sounds that might have arrived straight from the AACM, sharply chased by thunderous Gene Krupa-ed jiving?

The Valery Ponomarev Big Band is more regularly convened, and this is evident in its shining, sleek delivery. They have a monthly residency at The Garage, as well as other bookings at Iridium and the Zinc Bar. Revolving around the repertoire of drummerman Art Blakey, trumpeter Ponomarev’s ranks are very much in thrall to the exuberant personalities of both men. This is a beneficial state of affairs. Ponomarev seemed like a benevolent dictator, openly in ecstasy as these barnstorming tunes were essayed, urging his players on with sheer physical gusto.

This was a one night stand, as part of the club’s Generations In Jazz festival. The Russian-born Ponomarev calls his project Our Father Who Art Blakey, in keeping with his brashly good humoured attitude. He was a four-year member of Blakey’s Jazz Messengers, and has dedicated himself to enlarging their songbook into a big band existence. The arrangements are rooted in a conventional multi-ranked swing, but they’re populated by enough surprises (and an abundance of vitality) to shine through the amber veil of nostalgia. They offered yet another reading of “Caravan”, but a series of time-changes, mood-alterations and varied soloing approaches almost made the listener forget which tune was in place for such an epic journey. The essence of the piece was never allowed to escape, but it maintained a freshness that justified another visit.