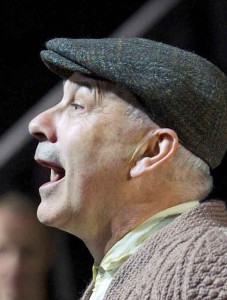 ‘He was Kafka but British.’- this from director David Farr who has revived Harold Pinter’s play, The Homecoming. And it is a homecoming of sorts too because the Royal Shakespeare Company premiered it in 1965 and is now bringing it back to life with all its power and venom at The Swan in Stratford.

The RSC always has been a firm believer in Pinter, a writer so talented that he was awarded the Nobel Prize for Literature 6 years ago.

His cut down language, his  poisonous pauses and the utter simplicity of the words that creates a Kafkesque surreal nightmare makes The Homecoming at times uncomfortable but fascinating theatre.

It is a play about a family of sparring angry men. Enter a missing son with his wife Ruth. Her entry changes things- she comes into the men’s liar and, despite their seedy intentions, emerges as the dominant lioness.

They are cowed by her sexuality and reduced by her power even though they think they can control her. It’s powerful stuff.

Set design by Jon Bausor is spartan if not bleak to reflect the men’s lives.

There’s a strong performance from Aislin McGuckin who plays Ruth as an almost biblical seductress. And an over the top East End thuggish power emanates from actor Nicholas Woodeson as the ranting father of the household.

This is a play of sexual repression and boiling anger. And it takes that surreal Kafka-like weirdness to bring out the blackness- and the humour- of a handful of characters set to destroy each other with little else but raw language. And they do.