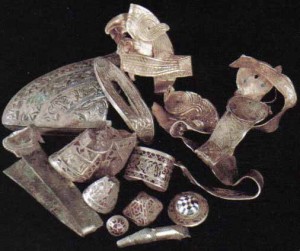 More than one hundred artefacts from the Staffordshire Hoard – the largest and most valuable collection of Anglo-Saxon treasure ever discovered – will be displayed in Washington D.C. later this year. The exhibition, called ‘Anglo-Saxon Hoard: Gold from England’s Dark Ages’ will be open at the National Geographic Museum from October 29, 2011 to March 4, 2012.

Birmingham City Council Cabinet Member for Leisure, Sport and Culture Cllr Martin Mullaney, said: “The Washington exhibition represents another exciting chapter in a story that continues to fascinate the world.

“It will build on hugely successful exhibitions in Birmingham and Stoke-on-Trent and a touring display of the treasure in Stafford, Lichfield and Tamworth – landmarks in the ancient kingdom of Mercia.

“We still don’t know how the treasure came to be buried in a Staffordshire field, who put it there, and why, plus questions such as how primitive people were able to make such outstandingly beautiful items without the aid of modern tools. Research into these wonderful treasures will help experts delve into these mysteries and reveal the secrets of the Dark Ages.”

The exhibition in Washington will also help the treasure owners – Birmingham City Council and Stoke-on-Trent City Council – facilitate vital research to help understand the unique artefacts and ensure that they are conserved for future generations.

Susan Norton, director of the National Geographic Museum, said: “We are thrilled to be the only US venue for this exhibition. National Geographic has been a window on the world since 1888, and bringing ‘Anglo-Saxon Hoard’ to our museum in Washington D.C. offers us the opportunity to showcase this incredible find and emphasise the importance of continued exploration.”