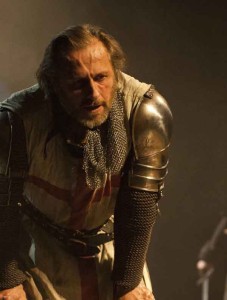 Towards the end of the play Dunsinane, the rebel Scottish queen says to the commander of the invading English army: ‘I have a proposal for you.’

And that seems to be the sum of it: a play about an army that has no reasoning, no aim nor no right to be in a foreign place. This play put on by the Royal Shakespeare Company in Stratford in conjunction with the National Theatre of Scotland is on the face of it a sequel to Macbeth. What happened, in effect after the Scots king was usurped and killed.

But it’s really about Afghanistan: an invading army takes over a chaotic state riven with internecine warfare in order to bring peace and security to the army’s home country south of the border. But violence escalates and everyone is bloodied and demeaned by vicious murderous unending warfare.

No one has any idea why they are in Scotland, what they’re supposed to be doing or how to get out.

Hmmm…sounds familiar as Obama begins his 2012 presidential campaign by getting  33,000 Yanks out of Afghanistan just two months before the big re election bid.

In this play, Macbeth’s widow takes to the hills and glens to stop the English. She negotiates with them, makes love to them, betrays them, treaties with them and hates them. The common English soldiers freeze, moan, lust after the peasantry, fail to understand the clans’ ways and tramp their way through the Highlands trying to reason with a populace that …just…wants…them…to…go…away.

Siobhan Redmond stars as Gruach (Gertrude from MacBeth) who is the Boudicca of Scotland. She puts on a towering performance, a regal leader stricken by anger and grief but bolstered by love of country- no matter how insane and chaotic. Jonny Phillips is the English general Siward (remember him from MacBeth?) trying to battle both his crumbling military bearing and his humanity. And Brian Ferguson is hilariously conniving  as a King Malcolm who remains in power as he manoeuvres between the sheer might of the English 11th century army and his rebellious clan chiefs.

The National Theatre of Scotland is the company that brought us the coruscating play Blackwatch which portrayed how the Brit grunts muddled through Iraq. Now with Dunsinane, it has offered not so much a play about the past. But one about a very crucial present.