Its common these days to hear that an institution that occupies a ’60s building now feels that its time to discard it and replace it with a brand new ‘state-of-the-art’ facility. They only have to label the old building ‘Not fit for the 21st Century’, mention ‘asbestos’, ‘concrete cancer’, or bad plumbing, to win public sympathy and rule out the possibility of making it good.

Admittedly without detailed technical knowledge of these buildings it can be hard for an outsider to judge whether they are merely following fashion, or whether the defects of their building are genuinely fatal, but my experience of defending the Central Library from demolition suggests that building defects are rarely the real reason behind the decision nor are those defects impossible to remedy using modern techniques. 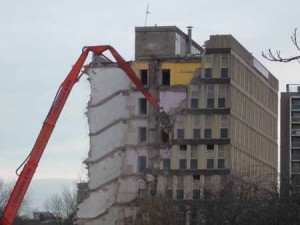 Universities, colleges, schools and public institutions are increasing behaving like commercial businesses that compete with each other for customers. They believe that a big part of their appeal is the newness of the building they occupy, although many reputable educational institutions make do with buildings that are very old, highly adapted or architecturally unremarkable. The new business-orientated colleges want to make their headquarters buildings look more impressive than their competitors on their promotional brochures.

So we have seen over the past decade Joseph Chamberlain College, South Birmingham College, Matthew Boulton College, and Bournville College abandoning their old buildings and trying to outdo each other in the exuberance of their new ones in a funding bonanza which now seems to have dried up.

Some schemes that were in the pipeline are now in doubt: Birmingham City University’s plan for a new Eastside campus was derailed by the HS2 station and has had to been re-designed for another site. We are still awaiting news of the re-location of the BCU’s Conservatoire in Paradise Circus. 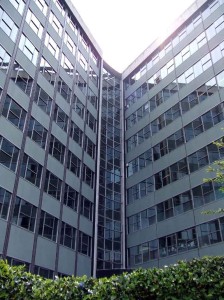 Birmingham University’s plans for a flagship Dental School failed to get off the ground in 2004 due to funding problems when Birmingham didn’t get enough student applications. Two years ago they planned a £585 million scheme on the Battery Park site in Selly Oak. The University said its 10-storey premises in Whittall Street, built in 1963, was inadequate, with cramped facilities and an inflexible layout, due to large concrete pillars, which hindered modern dental and teaching services and had no expansion potential. Last year a revised £100 million scheme also failed to make progress.

Their latest idea is for a modest £31 million 5-storey building of 14,000 sq m on the site of the BBC Pebble Mill Studios that were demolished in 2007 in anticipation of a science park being built there. No other developer has come forward to build a science park so the owners of the land applied to change it to medical use.  A Dental School fits the bill and would complement the shining new QE Hospital that stands guard over Selly Oak.

Nobody begrudges the dentists the best facilities they can afford but so far they have not been able to show that a new building on another site is a practical means of achieving it. Staying where they are and adapting and refurbishing the building and upgrading the services may prove to be a more viable proposition. Rather than see that as an admission of failure it could show how an enlightened educational institution can be a good steward of increasingly scarce energy and material resources.