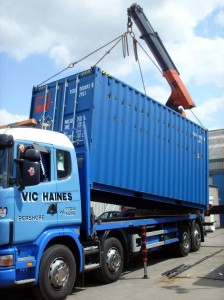 The RSC begins its journey at Liverpool Port last week

The Royal Shakespeare Company (RSC) is set to travel across the Atlantic, from its traditional home in Stratford-Upon-Avon to the bright lights of New York.

The expert logistics services of freight forwarder, Embassy Freight Services (Midlands), based in Sutton Coldfield, have been enlisted, to transport the RSC’s flat-packed theatre all the way to The Amory, on Park Avenue, in New York.

After the first containers left Liverpool Port last week, the first shipment is currently halfway through its journey, and is expected to arrive next week (1st June). The entire shipment will have arrived at the Amory by 17th June. Once assembled in its temporary home, the RSC will perform a series of classic plays, before the theatre is dismantled for Embassy to transport home again, after its 13-week stay.

The RSC have been working tirelessly to build the 900-seat replica of the Courtyard Theatre, in Warwickshire, to be housed in the Amory. Crowds of Americans are expected to flock to the site on Park Avenue, to experience world-famous performances, including Romeo and Juliet, As You Like It and King Lear.

Delivering such a large, complex consignment, is a first for Embassy Freight Services (Midlands), but the team are relishing the opportunity to deliver the staging.

Paul Wright, Operations Director explains: “This is the first time we’ve shipped such a large auditorium. We’re shipping the whole stage, from the structure, through to the lighting, the seating and the props.”

The whole process has been planned to the last detail. Mr Wright continued: “In fourteen months of planning with the RSC, we have developed a thorough logistics plan, with details on the ten to eleven-day transit across the Atlantic, through to the storage and delivery for re-construction at the Amory.

“This is all being completed within a two-week window. We will track the consignment right down to the nuts and bolts”, he added.

The story of the RSC making the journey overseas to the ‘Big Apple’ has already been making headlines on BBC Midlands Today, BBC Coventry & Warwickshire radio and other West Midlands press.

It is hoped that the continued success of this unique voyage will be celebrated long into the summer shows. Paul Wright added:  “The RSC have been a pleasure to work with.”

This major project is a testament to the resilience of a West Midlands logistics firm who, now in their 10th year, remain triumphant in the face of challenging economic times.