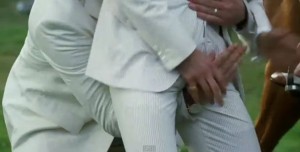 One of the smallest lists in film history is ‘Successful remakes.’ A much longer list is ‘Reasons to hate Russell Brand.’ There was therefore little chance I’d be weighed down with expectation as this one began.

Brand playing the title role made famous by Dudley Moore was an act of either insanity or genius, depending on how you look at it. The part of ‘English aristocrat in New York’ was made for one of them, and it isn’t Russell. In fact, the only part that’s made for Russell Brand is himself. Having cornered the market in controversial, drug-taking womaniser as a comedian in Britain he’s now moved to Hollywood to play the same character on the screen, and for some reason he’s never out of work. Obviously Hollywood is having one of its regular “The British are coming” moments (see also Ricky Gervais).

The plot is skimpy enough to be dismissed in a couple of sentences. Rich kid’s mother threatens to disinherit him unless he changes his playboy ways and marries the girl she’s decided will make him a suitable bride. He then meets the penniless, independent Naomi (played by Greta Gerwig; Liza Minnelli did it better). You can guess the rest.

Brand makes a decent fist of the title role and there are some nice touches as he attempts to answer the question of what you could do if you literally did have more money than sense – sparring with Evander Holyfield might be questionable, but playing with a train set on the scale of halting Grand Central Station brings out the big kid in us all.

British nannies have been big in America since Mrs Doubtfire, so the John Geilgud role is handed to Helen Mirren, playing a senior Jo Frost in a performance that won’t emulate Sir John’s Oscar triumph but provides a few good one-liners, while Nick Nolte’s cameo is forgettable.

What is interesting is the way in which certain aspects of the original have been altered for modern consumption, or rather, modern morality. Moore’s Arthur was a lovable drunk. Alcoholism is a touchy subject now, so Brand’s drinking makes him worse. Moore enjoyed life and was bored by his wealth; in our modern consumerist society Brand has fun, fun, fun and it all costs.

Arthur won’t increase the size of that small list I mentioned earlier, but it won’t do the same for the longer one, either. It’s Brand’s film, and whether you like it or not will hinge on whether you think he’s a comic genius or an overbearing bore. Ultimately, its most significant role in cinema history will be to nudge Russell Brand a bit nearer to the end of his fifteen Transatlantic minutes