Walking down the Alcester Road in Moseley on Friday afternoon, there was little indication of a long-running festival taking place in the midsts.

Yet, hidden between an estate agents and a pizza restaurant lies the entrance to Moseley Park & Pool, the venue for the Moseley Folk & Arts Festival. Now in its 14th year, the “& Arts” bit has been added to the title in recognition of the variety of activities and entertainment now on offer over the weekend. As the programme cover also stated, “All music is folk music,” which explained the eclectic mix of artists performing at the festival.

The main stage was obviously the focal point of the festival, but there were two other music stages. The Lunar Stage was positioned next to the main stage and acts alternated between the stages across the weekend, meaning that, should you so wish, you could pitch up and be entertained all day without needing to move. That would have been a shame though, as there was so much more on offer.

The third music stage, the Kitchen Garden, had a picturesque setting with Moseley Pool as its’ backdrop – highlights of this stage’s line-up on Friday night included Simply Dylan, who – as the name suggests – performed a varied mix of Bob Dylan’s back catalogue. 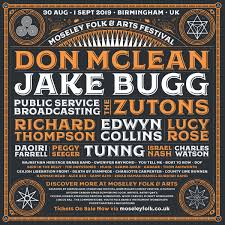 Perhaps the most intriguing stage was Speakers Corner, a marquee located in the corner of the tennis courts. On Friday it had already hosted a diverse programme which included storytelling, a talk by Extinction Rebellion and a Q&A with Joy Division and New Order percussionist Stephen Morris before concluding with a set by the Ouse Valley Singles Club.

Essentially a modern day skiffle band – with hints of punk, rock and roll and even reggae – their fast-paced, humorous lyrics certainly had the assembled crowd entertained as they played a set which included tracks such as Man Flu, Whatever happened to the White Middle-Class Rasta and Central Heating Skank.

On the main stage, Edwyn Collins performed a one-hour set which included a mix of old and new. From his time with the band Orange Juice there was Falling and Laughing and, of course Rip It Up, while songs from his solo career included one of his first Don’t Shilly Shally to one of his latest, I Guess We Were Young.

Collins suffered two cerebral haemorrages in 2005 and performed half his set seated and the other half stood bolt upright at the mic with an aid of a walking stick. When speaking to the crowd he was often slow and slurred, but he certainly hadn’t lost any of his sharpness or wit when interacting with either members of the audience or his band. By the time that he had concluded his set with his most famous track, A Girl Like You the crowd were very appreciative of his efforts.

Co-headlining Friday night was Liverpudlian band The Zutons. They had enjoyed significant success in the first decade of the 21st century with three albums and a multitude of top 40 singles, but after disbanding in 2009 they have only recently re-formed to celebrate their debut album with a tour which began in Birmingham back in the spring.

Opening with Zuton Fever, the Scouse strains of lead singer Dave McCabe were backed up by the inimitable sounds of Abi Harding on saxophone and the tone was set for a high energy, rock and roll performance. The set list included Havana Gang Brawl, Pressure Point, Why Won’t You Give Me Your Love and Confusion, before concluding with an en masse singalong to Valerie and You Will You Won’t.

Sharing the headline billing on the opening night was Public Service Broadcasting, a unique act in themselves as they blend instrumental tracks to the backdrop of archive footage of public information and propagnada films. For me, the only downside of the set at Moseley was the limited space available for the screens to show these films so that you couldn’t fully appreciate the interaction between the music and the images.

After performing a number of tracks from their latest album Every Valley in their main set, their encore consisted of Gagarin from their second album and Everest from their first. They were even self-aware enough to declare that they would certainly be testing out the festival’s motto of ‘All Music is Folk Music’.

Headliners for the rest of the weekend included Jake Bugg and Don McLean, but with a packed programme including stand-up comedy through to activity workshops on sculpture making and instrument lessons, there really was something for everyone at this family-friendly festival which continues to go from strength to strength.