Help needed for women and families at risk.

Moseley based women’s charity Anawim, has launched a new fundraising appeal to continue its work to help the growing number of Birmingham’s women and their children at risk of domestic violence and homelessness benefit from its open access drop-in centre.

The urgent appeal is timed to coincide with the worldwide charitable initiative, Giving Tuesday on 27 November just at the start of the Christmas giving season. Anawim’s drop-in hopes to raise as much money as possible in order to continue its vital work supporting Birmingham’s women and their children in crisis. 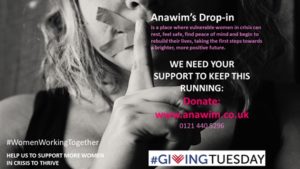 “Anawim’s Drop-in has been designed to be a welcoming safe refuge for more than 150 women in a time of urgent need,” confirmed Fundraising Officer Emily Johnson. “We see Giving Tuesday as the perfect opportunity to raise funds and community awareness for us to help support even more women and their children in distress; especially vulnerable women who feel they have nowhere to turn at a time of urgent need.”

Commenting on the charity’s funding initiative, Chief Executive Officer Joy Doal MBE, said “The drop-in centre is the kind of safe space where women in crisis such as those fleeing domestic violence or at risk of long-term homeless and those recently released from prison can rest, feel safe, find peace of mind and begin to rebuild their lives. With the support of our staff, mentors and volunteers at Anawim we work diligently to support the women who use our service to move on to enjoy a brighter, more positive future.”