From 1st–24th June the sixth edition of Birmingham International Dance Festival 2018 has seen the sun shine and the city dance. Audiences were treated to an amazing 205 performances by 338 artists in venues, streets and parks across the city.

Kicking off with a dance-packed ten-day takeover of Victoria Square, in the heart of the city, the festival brought a first, with an exuberant glitter-filled morning rave. The square hosted a celebration of exceptional young community talent with enthusiastic crowds of all ages taking part in a feast of workshops from swing, disco, northern soul, house, voguing and waacking, to hula hooping majorettes and Moseley Folk’s incredible ceilidh. 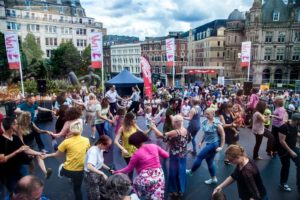 Not forgetting the unstoppable inflatable pink men who playfully, sprung, floated and bounced from Birmingham Museum & Art Gallery to the famous Bull, bringing smiles to the faces of surprised shoppers.

The festival was excited to be able to take dance to communities beyond the city centre with a fabulous family weekend at Midlands Arts Centre in Cannon Hill Park and performances delighting young patients at Birmingham Children’s Hospital. The stunning Origami, a shape-shifting shipping container and solitary dancer, also thrilled audiences at Eastside Park, Birmingham City Football Club and Tesco Superstore in Witton.

BIDF’s theatre programme was inspired by themes of the imagination, body, mindfulness and digital art, with the ambition to present new and engaging choreography. At mac, children became Icelandic sheep, and perceptions of dance and disability were actively challenged; in the Patrick Studio, DanceXchange’s space for experimental choreography, audiences were invited to interact with computer generated dancers in a virtual reality world, and were immersed in an audio visual experience of sculpted light. At Birmingham Repertory Theatre a huge community cast took to the stage, while at Birmingham Hippodrome virtuoso performers of urban arts, such as inline skating, breakdancing, freerunning, and BMX, displayed breathtaking artistry on an imaginative set of moving ramps.

Lucie Mirkova and Paul Russ, Artistic Directors BIDF18 said: “What an amazing three weeks it has been! We’ve seen and experienced and joined in with dance in all parts of the city and with everyone, from those who have never danced before, to those at the top of their profession.

We are delighted that this festival has developed new formats and new ways for great artists to present their work. 2018 saw us look into the future and explore how we embrace a changing world and share with communities across the city how artists see these challenges.”

Over 200 artists from outside the region and across the world were attracted to perform in the festival. They were all impressed by the incredible welcome that Birmingham’s communities have given and felt their visits were truly memorable.”

This festival was notable for a number of partnerships with city and regional businesses supporting its work.

Richard Brooks, Customer Experience Director at West Midlands Railway, BIDF Official Travel Partner said: “Seeing the whole city getting involved with the Festival has been excellent. The artists and performers have helped create a real sense of excitement that everyone has been on board with. One of our key goals is to encourage people 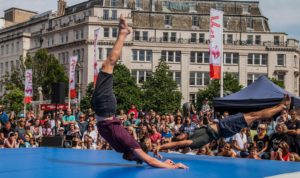 to get out and explore their local areas using our trains and events such as this, which involve numerous artists and locations, are great for getting the region moving, in more ways than one!”

Jonathan Bryce, Project Maker at Colmore Business District, added: “Colmore BID was proud to support Birmingham International Dance Festival by sponsoring the Festival Square this year. It’s important for us to animate our local spaces and to provide cultural experiences for those that live, work and visit the District. We are lucky to have this fantastic festival in Birmingham which brings artists from across the world to our doorstep, and to celebrate dance in all its forms.”

Rachel Evitts,Patient Experience Sister, Birmingham Women’s and Children’s NHS Foundation Trust said: “We were really pleased to be able to bring the festival to Birmingham’s Children’s Hospital. The performance was very well received by patients, visitors and staff alike. There were a number of patients that were too unwell to leave the wards, who could look out of their windows to see and enjoy Moon. The smiles on their faces showed just how much they enjoyed it! Performers also visited a number of ward areas to take their magic to the bed sides.“

And the next festival, due in 2020, is already in the planning stages. BIDF producers DanceXchange are keen to talk to artists, communities and businesses who would like to be involved. Keep up to-date with dance across the city via www.dancexchange.co.uk