Host of events to take place during city festival. 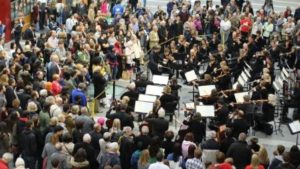 For dance lovers Birmingham Weekender have some special treats lined up, including Square Dance in Victoria Square delivered with the organisers of Moseley Folk Festival. Hour by hour audiences can experience disco to folk, bhangra to Northern Soul as well as striking Kathakali dancers visiting especially for Weekender from India followed by live music and heavyweight DJs each evening including Craig Charles, David Rodigan and Don Letts.

Look out for performances from the city’s own Birmingham Royal Ballet in the Bullring, and spectacular South Asian dance throughout the weekend as well as new commissions from 2Faced Dance and Rosie Kay and a preview of DeNada Dance Theatre’s TORO: Beauty and the Bull presented by DanceXchange at the Patrick Centre.

The whole programme offers fantastic cultural experiences for families including Rangeeli, a colourful community parade taking place through the city-centre complete with Harminder the Elephant; an Alternative Village Fete based at the Bull Ring Markets opening especially for the Weekender on the Sunday where you can join in Drag Queen Story-time, a new commission for Birmingham Weekender, and get involved in a mega den building project with DenCity by 815 Agency.

Clash of Drums presented by Birmingham Hippodrome, a night-time feast of sound and spectacular fireworks takes place Eastside Green and promises to be an experience the family will never forget! Families can also test their balancing skills with Still Walking and the Bullzini Family Funambulists in Cathedral Square.

Selfridges host live performances throughout the weekend from Bostin Brass to Soweto Kinch as part of their Music Matters campaign. In the Mailbox expect three world premieres from the creative powerhouse that is Birmingham Opera Company from three Birmingham composers – Susannah Self, Chloe Knibbs and Yfat Soul Zisso.

Visual arts will transform the city encouraging people to look again at familiar spaces, from live painting from Soul City Arts and The Barber Institute presenting The Barber on the Streets with artist Matt Reeves, graffiti artist Zuke and illustrator Deka all curated by Mohammed Ali, to ethereal projections in Cathedral Square by Tony Oursler presented by Birmingham Museums Trust and Artangel. 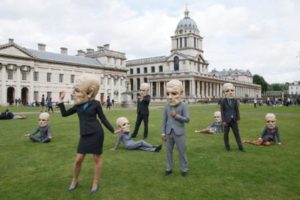 Expect the New Alexandra Theatre to be transformed with Sky Dancers, inflatable sculptures by world famous artists Designs in the Air. You can join BBC Birmingham as they celebrate the opening of its new The Archers Exhibition in their base in The Mailbox and join in a social drawing event – pens, pencils and paper provided – at the Edwardian Tearoom Birmingham Museum & Art Gallery.

Theatre fans can see a preview of Outbox Theatre’s As A Tiger In The Jungle at the Birmingham Rep which uses circus skills and spoken word to tell an inspiring story of life, circus and survival. Outside street theatre will pop up here, there and everywhere: watch out for the hummelmania tribe – rubber band creatures – created by Rotterdam artist Mette Sterre and KTO Theatre’s Peregrinus presented by Birmingham Hippodrome will see ordinary workers in striking masks – massive heads – journey through the city, appearing suddenly to perform to instantly recognisable music.

And if that’s not enough, join Birmingham Conservatoire on a Magical Mystery Tour, which starts at Bullring and ends at Birmingham’s new Conservatoire, opening its doors for the first time with a Junk Orchestra and plenty of sonic surprises along the way. For a travel experience you will never forget, and to rest your legs without missing out, hop on board Fierce’s Tram-a-lama-ding-dong! On the Network Midlands Metro between New Street and the Jewellery Quarter, your onboard entertainment comes courtesy of Lorraine Bowen, Figs in Wigs and Birmingham’s First Lady Mrs Barbara Nice.

Festival Directors, Graham Callister (Birmingham Hippodrome) and Piali Ray (Sampad) said: “We are delighted to oversee the return of this ever-popular family-friendly festival, which this year again celebrates all things Birmingham – its diversity, its communities and its artists; welcomes international performers from around the world to our city, and plays a role within Utsav, Birmingham’s Year of South Asian Culture.”

Janice Connolly BEM aka Mrs Barbara Nice said: “I love Birmingham Weekender. The whole city comes alive with art for everyone popping up all over the place. Barbara is a keen dancer and public transport user and I am really looking forward to tripping the light fantastic on Saturday 22 September in Victoria Square and getting on the tram on Saturday afternoon. See you over the weekend for fun and frolics.”