Alan Clawley on the role our past can play in the present. 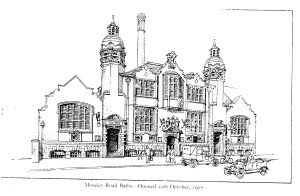 Most of us like to keep some reminders of the past around us. Life would be poorer if, for example, there wasn’t a single car or motor-cycle more than 50 years old left in the world to grace our roads every now and then.

We might think these ageing machines technically obsolete and wouldn’t swap them for the latest models, but they remind us of where we came from and how much has changed since those pioneering days. At some point they became collectors items, painstakingly restored to their original condition, and treated like antiques. They have become part of our history. We might even have owned one once and now regret sending it to the scrap yard before it attained lucrative heritage status.

It’s the same with old buildings and other structures, such as canals and railways. Some old buildings can be moved into a museum such as Avoncroft and the Black Country Museum or put in a conservation area such as Coventry’s Spon Street, but most have to be looked after where they stand. The National Trust’s back-to-backs in Hurst Street are a good example.

Birmingham’s Victorian and Edwardian public baths were built more than a hundred years ago when the poorest houses had no bathrooms and there were no natural rivers or lakes nearby for people to safely swim in. The building of public baths followed the outward growth of the city. The very first was in Kent Street which was opened 1851, followed by Woodcock Street in 1860, Northwood Street in 1862, Monument Road, Ladywood in 1883 and Victoria Road, Aston in1892, They were all demolished, one by one, between 1920 and 1950.

The need for washing baths declined sharply when the inner city slums were cleared away and the Urban Renewal programme got going in the 1970s. Cheap air travel also made sunny bathing beaches easier to get to. The result is that Moseley Road, Birmingham’s only remaining example of an Edwardian public baths, faces an uncertain future at the hands of the City Council.

Perhaps an Edwardian-style swimming baths is not what Birmingham people have been led to expect for their regular recreational swim, but it is highly likely that many of them and even more from far away would love to visit and swim in a beautifully restored vintage swimming bath if not every week, at least now and then. The people who flock to the Severn Valley Railway or the Black Country Museum testify to this phenomenon. People visiting heritage attractions will almost certainly get there using the latest means of transport and go home to twentieth-century houses.

There is no contradiction in this. We don’t have to give up everything that’s old to enjoy the new. A wealthy country such as ours can surely afford to have both.

4 thoughts on “Our vintage baths”