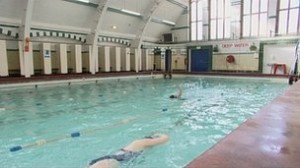 Writing about this architecturally-listed swimming pool engenders a sweep of heated opinion. Debate. Finger-wagging. Arguments. Not just about swimming. But about inner city development; the questions of what people really want from leisure; the power of the heritage industry; and, of course, local government budgets and whether a council, no matter how strapped, should pump money into a crumbling building or fight to keep the city’s history alive.

My two boys swam here at these 100 year old baths, doing the breaststroke inside the tiled walls, underneath its century old ceiling, alongside its patterned floors and hokey old pipework, changing in the funky poolside booths. I know the pool.

So, the council’s decision to shut it down by March 2015 does affect me. As it will affect swimmers, pensioners, schools desperate for space, aqua fitness clubs and people who use to it meet old friends within its dear old 100 year old tired tiled walls. 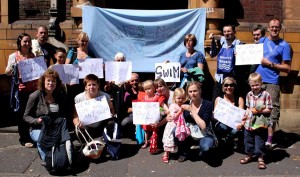 The local councillors admitted the cost to keep this building open is just too much- estimated to run from £8 million to £20 million depending on what you read and where. They’ll build new ones, they promise. But, hey, where’s the cash? Is it an empty promise to shut people up, to buy political time?

So, to see what south Birmingham will lose, another trip down to Moseley Road Baths in Balsall Heath.

Yes, it is tired and historically neglected, its glazed tiling chipped, worn and its walls littered with jimcrack pipework and ugly mysterious gizmos that are totally out of character with its early Edwardian heavy elegance.

But as I swim (and the water is clear and warm) in a pool vigilantly maintained and scrubbed as well as can be inside the old shell of the building, I had to ask the vital questions: what do the people of inner-city Balsall Heath deserve? That’s what counts. They pay their council taxes, vote, depend on the clear thinking of the councillors?

What do they, old folks, young mothers, kids, deserve?

Well, it is easy to knock an old institution. But this pool should close and a new one opened for all those who want a 21st century swimming pool with alot of air, light, a cafe, a gym, parking, creches and a general feeling that you are not paddling in a shabby museum.

It really is time to move on. A city cannot swim in Heritage-land forever.

I took a friend from out of town with me. He didn’t know about the baths or the well argued case to keep it open. His reaction is it  “… felt like a prison.”

Old building or a page of history?

“Do we have the right to inflict an old architecture… on a younger generation?” he asked.

And he asked this after he peeked beyond the locked doors of the grand 25 metre ‘big pool’ with its galleries and original balustrades, which has been shut for a decade and now lies in quiet dusty silence. He asked this after dealing with the inadequate changing lockers, the two showerheads for a whole pool, the light trying to enter through a big window with its broken panes now covered inefficiently by plastic. He asked this after an attendant told him the pool is part of a neighbourhood that he likes, that he lives in, that is part of his story.

The lobbyists, such as the Friends of Moseley Road Baths, see past these problems. They say councillors wilfully ignored a plea for Heritage lottery money and will have a hand in further inner-city deprivation if they shut the doors in 2015.

Writing on a website earlier this year, former city counciillor Andy Howell said: ‘These crumbling and once great buildings present a dramatic image of decay and decline. Whatever the future of the Baths building it seems to me to be crucial that Birmingham City Council recognises its responsibility in not adding to that decline by letting the baths sit closed and empty.’

I agree. But I say shut Moseley Road Baths and guarantee a clean, new, up to date swimming complex that reflects the potential of this century. Not a reminder of the old days.

But sometimes opinion and reason go by the boards. As I left the old pool, I ran across a friend who lives locally. He was in for a watery constitutional up and down the lanes.

“I learned how to swim here. I want it to stay open.”  he  said. It was a  call from the heart and sometimes the heart listens not only to what is best but to what is human.

2 thoughts on “Moseley Road Baths: Swimming Against the Tide”