Richard Lutz states that he prefers swimming in a modern pool to the Edwardian splendour of Moseley Road Baths. Well Richard, should the planned closures of Birmingham’s last remaining pre-World War II pools, as unveiled recently by the city council, proceed then your almost your only choices will be either homogenised 25 metre pools housed in forgettable bland boxes (such as those at Harborne and Solihull’s Tudor Grange) or corrugated iron blot-on-the-landscape 1970s/80s leisure centres.

Not in Balsall Heath though, because despite Richard’s call to replace the Grade II* Moseley Road Baths with a modern facility, there will be no pool in B12. From September 2015 if the patrons of Moseley Road wish to continue swimming they’ll be expected to travel to Sparkhill. An awkward and time consuming journey for many, adding expense, pollution and congestion, as a valuable local facility in the heart of the community, next to both Balsall Heath library and the health centre, is replaced with a privately operated (although council owned) pool and fitness gym. 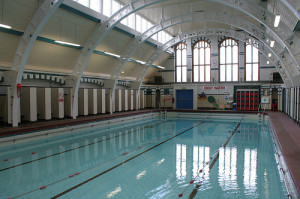 Sparkhill, along with new pools in Ladywood (Council leader Albert Bore’s constituency) and replacement pools in Shard End (Deputy Leader Ian Ward’s constituency), Erdington, Longbridge and Stechford will be funded by Prudential Borrowing, meaning that the initial £36 million cost to the city will rise considerably once interest charges are added. Moseley Road Baths, in comparison, requires an initial £3 million of council funding (spread over three years), neither a significant nor unreasonable sum given that the citizens of Balsall Heath have a right to decent public services and that Moseley Road Baths is a building of national (arguably international) importance which has been criminally neglected for many years.

That £3 million then releases an additional £5 million grant from the Heritage Lottery Fund. Indeed, unlike every other publicly owned swimming pool in Birmingham, Moseley Road Baths’ listing status entitles it to receive grants from national sources to fund its full restoration. A bargain for the city then, not a burden, leveraging into Birmingham monies that would otherwise go elsewhere.

In the truest sense Moseley Road Baths is a community pool. Lacking a car park most swimmers walk, cycle or take public transport to the pool. School groups (and over a dozen local schools still visit) often walk crocodile-style to the building. The warmer water appeals to those with back problems, the poolside cubicles are popular and the staff have a rapport with the customers. In contrast, privately-operated Sparkhill will be run with profit in mind, so marginalising the times available to community groups and those whose swimming is currently subsidised by schemes such as Be Active.

Indeed, research shows that closing a crucial local amenity such as a swimming pool impacts hardest on society’s most vulnerable. Such people are the least likely to travel to another pool as the cost of public transport (already £4 per adult for a return bus journey and soon to rise again), bad weather or the unwillingness of parents to allow their children to travel unsupervised, results in people ceasing to swim altogether.

Whilst the condition of the Gala Pool, closed for over ten years, continues to deteriorate, sunshine pours through the lantern roof of Pool 2, while the high windows make it ideal for the women- (and indeed men-) only sessions, for which there is an increasing demand. Yet perhaps more important than all of this, Moseley Road Baths offers the now rare experience of swimming in a historic setting. Time and again swimmers speak of its cathedral-like ambience, indeed swimming at Moseley Road Baths is a qualitatively different experience to using a modern pool, a fact summed up by one regular, who memorably remarked: “Compared to Moseley Road Baths modern pools are like flooded car parks.” Closing it would be akin to replacing a historic local High Street with a shopping mall, trashing our heritage yet again simply because times are tough.

Yet we do not have to look far to find examples of organisations that have taken a very different approach to historic pools. Woodcock Street Sports Centre at Gosta Green, operated by the University of Aston, and which contains Birmingham’s oldest pool (dating from 1902) underwent a £5 million refurbishment in 2010/11 that restored some original features and added a dance studio and a larger fitness gymnasium. In Sandwell, the local authority restored the 1933 Thimblemill Road Baths to great acclaim, while pools at Ironmonger Row in Islington, Primrose Street, Alloa and the Carnegie Centre, Dunfermline have undergone thrilling and imaginative rebirths.

The same could happen in Balsall Heath and as a member of the Friends of Moseley Road Baths group I have seen numerous exciting ideas in recent years for how to make the most of the building’s undeniable potential whilst maintaining it as a swimming and health facility. Bringing the best of these to fruition requires the kind of belief and imagination so bereft of the city’s current political leadership, people who’s real reasoning for wanting to close the baths is, I suspect, to make Sparkhill a more attractive proposition to private contractors (given that Moseley Road could be seen as a rival facility).

So Richard, whilst Moseley Road Baths may look torn and frayed, a little tired and weary, it is most certainly not time to move on in the way you suggest, to dispose yet again of the old. Birmingham has travelled that road for many decades, tearing down its heritage, destroying well designed communities and replacing them with tower blocks and other low quality urban housing, substituting thriving high streets with gigantic supermarkets and retail parks, themselves surrounded by car parks and accessed via inner city motorways and other pedestrian unfriendly road layouts. In the process Birmingham has furthered its reputation as an ugly, unlovable urban sprawl, to be sneered at and mocked by those travelling north to the heritage and culturally rich cities of Manchester, Liverpool and Newcastle or south to the dynamism and glamour of London