We’ve heard of the ‘squeezed middle’, but has Birmingham and the wider region become the ‘invisible middle’, at least to Westminster? Steve Beauchampé reports. 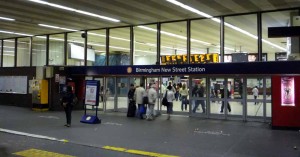 The Cabinet met in Birmingham on Monday, and the Prime Minister and his Deputy even found time to hold a press conference in Smethwick.

There they announced an additional £4.2bn investment in Britain’s rail infrastructure, which, coupled with £5.2bn previously announced, adds up to what David Cameron called the biggest investment in Britain’s railways since the Victorian era. Yet almost none of this money is being invested in Birmingham (on the same day that it was announced that the city’s population had risen 88,000 between 2001-2011 to 1.1m) and only a very small proportion is going on schemes in the wider region. London meanwhile, gets £350m for upgrades to Waterloo Station alone, while Manchester and the major cities of northern England, will see substantial electrification upgrades.

In comparison, slightly extended platforms at a handful of stations on the Stratford-upon-Avon line that will permit the running of longer trains (should the train operators deem there to be sufficient demand) are the sum total of Birmingham’s infrastructure upgrade. Meanwhile, the most significant scheme for the wider region will be the electrification of the line from Nuneaton to Leamington (via Bedworth and Coventry) as part of an ‘electric spine’ linking the north east with the south coast ports. Whilst this line is mainly freight bearing, passengers will also benefit from some dual tracking around Coventry where the track is currently single.

Around 45 years after lobbying began, the Walsall – Rugeley line will be electrified, while the Cross City Line South will be extended to Bromsgrove (we think that this means that the spur from Barnt Green to Bromsgrove will be electrified) and there will be some small track upgrades between Water Orton and Tamworth (along with improvements to a repair depot). And well, that’s about it.

Sure, all of these schemes are to be welcomed, and the region will further benefit from the substantial Midland Mainline enhancements which will improve journey times between Birmingham and the East Midlands, Yorkshire and the North East. But as the Government pointed out, rail passengers will be expected to meet the cost of these improvements, and this will involve higher fares, so West Midlands travellers might be expected to pay more to fund infrastructure improvements which benefit other parts of the country rather than their own. Such is the nature of these things, but it also seems reasonable to ask why there was no announcement of four tracking the line between Birmingham and Coventry, no money to address the problems of tunnel access to New Street Station, no electrification of the (mainly) freight line that runs behind St. Andrews and on past Saltley, no money to increase the number of stations in East Birmingham, to re-open stations in King’s Heath and Moseley or to re-instate the Walsall to Stourbridge line. Funding for just one or two of those schemes might have been satisfactory but the region got none of them.

Now the Government might argue that Birmingham is destined to be at the hub of the HS2 network, but there are increasing doubts that such a scheme will happen and the possibility of it didn’t prevent the Government from investing heavily (yet again) in the rail infrastructure of London and the South East, which would also benefit from HS2.

Several months ago on this website Alan Clawley suggested that to Londoners, Birmingham was invisible. This week’s announcement is perhaps evidence that he was right.