The Balsall Heath Neighbourhood Plan is Going on public display. 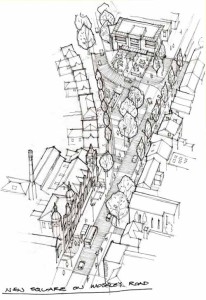 After months of consultation the draft Neighbourhood Plan for Balsall Heath, developed in conjunction with local groups and individuals and co-oordinated by local architect and planner Joe Holyoak, has now been prepared is about to go on tour. The plan outlines potentially exciting and innovative proposals for the physical and economic renewal of Balsall Heath. If approved, it will create the context in which the future development of Balsall Heath will take place.

For six weeks, from June 18th to July 29th, the draft plan will be on display at the following locations:

Residents are encouraged to come to one of these locations and look at the plan. Tell the Balsall Heath forum what you think of it and they will include your suggestions in the final version of the plan. This will then be put out for a vote at the same time as the vote for a West Midlands Police Commissioner on November 15th. If it’s approved, the plan will then set the scene for the development of Balsall Heath over the next few years.

Residents are urged not to miss this major chance to influence the way their neighbourhood looks, feels and develops. Influence the plan and then vote on it.