Coventry University’s performing arts students will be showcasing their final year projects in theatre, music and design from next week as part of the School of Art and Design’s annual Degree Show. 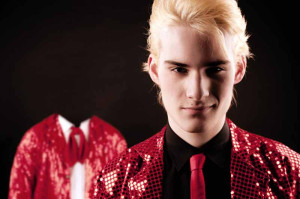 A launch night on Thursday 3rd May will offer a sneak preview of a selection of performances lined up for the Degree Show’s SPECTRUM 2012 performing arts festival – including a student’s debut album and an interpretation of an acclaimed and controversial play from the nineties.

SPECTRUM 2012’s performances begin in anger on Tuesday 8th May at venues across Coventry and the West Midlands, and will feature a diverse range of work from students studying BA (Hons) degrees in Dance Making and Performance, Theatre and Professional Practice and Music Composition.

The free-to-attend festival launch night – which kicks off in the Ellen Terry building, Jordan Well, at 7pm – will feature Music Composition student and acoustic singer-songwriter Jack Lord performing selected tracks from his self-produced debut album. His concert will take place on Friday 18th May at the same venue.

Student group Theatre31 will also be presenting a preview of its interpretation of the gothic fairytale The Pitchfork Disney, a dark and surreal adult play by Philip Ridley, which won acclaim and courted much controversy on its release in 1991.

David Steggles, final year Theatre and Professional Practice student at Coventry University and member of Theatre31, said: “We chose this play as it is both edgy and entertaining – if sometimes horrifying – and we really hope the audience will love that. We hope to offer them an experience as well as a show, drawing on the knowledge we have all gained while studying at Coventry University.”

The production itself is set to take place from Wednesday 16th – Saturday 19th May at the @A.E.Harris performance venue in the heart of Birmingham’s Jewellery Quarter, close to the city centre (110 Northwood Street; tickets £6 / £4 for concessions).

“We’re hoping it will whet appetites for what is set to take place over the course of the following few weeks during the SPECTRUM performing arts festival. The range of performances and material produced by our students in dance, music and theatre will cater for most tastes, so we’re confident people of all ages will find something to enjoy during the festival.”

Tickets for the launch, which takes place on the evening of Thursday 3rd May in the Ellen Terry building, city centre, are free of charge.

The Industrial Design, Media and Communication and Design and Visual Arts final year students will be exhibiting their work on campus at the Degree Show from June 2nd – 10th (excluding bank holidays).