The former president of one of the world’s largest and most successful motor companies will give a free talk at Coventry University next month as part of Coventry Car Day.

Sir Nick Scheele, who presided over the Ford Motor Company from 2000 to 2005, will deliver the prestigious annual Bugatti Lecture against the backdrop of the University’s free car extravaganza on Saturday 9th June.

Sir Nick’s impressive career saw him complete tenures as chairman and CEO of Jaguar Cars from 1992 to 1999, as chancellor of the University of Warwick from 2002 to 2008 and as president of Coventry Transport Museum from 2006 to the present. In 2001 he was knighted for services to British exports.

The Bugatti Lecture – entitled “The changing role of the British motor industry in the development and manufacturing of cars” – will take place at 1.30pm in Square One in The Hub, Jordan Well, and places must be reserved via www.coventry.ac.uk/coventrycarday.

Coventry Car Day is also set to mark the first public appearance in Britain of Ford’s Evos concept car and the new Peugeot 208 supermini, which were unveiled for the first time at the recent Frankfurt and Geneva Motor Shows respectively.

The event will see a host of prestigious cars – including Ferraris, Lamborghinis and Jaguars – displayed in University Square (opposite the cathedral steps) alongside historic Coventry-built marques such as Swift Motors and Triumph.

Cars designed by graduates of Coventry University’s world-renowned Automotive and Transport Design courses will also be on show, including the high-performance Ariel Atom and the Mercedes SLS AMG supercar.

A car-themed ‘Question Time’ will take place at 3pm in The Hub after the Bugatti Lecture, and will feature a panel of automotive industry experts chaired by Autocar magazine editor-in-chief Steve Cropley.

Members of the public are being invited to submit questions via the website and are encouraged to book a place in advance. 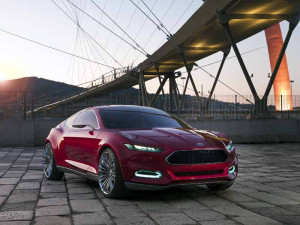 Andrew Noakes, associate senior lecturer on the Automotive Journalism MA degree at Coventry University, said: “The annual Bugatti Lecture makes for a fantastic addition to an already exciting line-up of automotive displays and exhibitions at Coventry Car Day, so we’re delighted to be welcoming Sir Nick Scheele to this unique event.”

“Our list of modern and vintage display cars is growing day by day, and the recent addition of the futuristic Ford Evos concept alongside a selection of rare and historic Swift classics will provide unprecedented variety and flair to the motor show on University Square.”

For the latest information on Coventry Car Day, visit www.coventry.ac.uk/coventrycarday.