mac birmingham may be 300 miles away from the Scottish capital but with this summer’s selection of Edinburgh Previews there’s a chance to experience the best of this year’s Festival Fringe before it’s even begun!

On Fri 8 Jun, Amy Lamé invites you to share her Unhappy Birthday. Morrissey – icon for the bookish, bespectacled weirdos of the world – is invited too. A seat is reserved for him… will he arrive clutching a bunch of flowers and a gift? Will he turn up at all? Unhappy Birthday is an exuberant culture clash of party, performance and DJ set, where guests will be called on to get out of their seats, play pass the parcel or even take on the role of Morrissey himself.

Cracking open the cult of celebrity and fandom, Amy flays fat, faith and sexual identity; probes the pains of growing up; and cross examines a curious nostalgia for a time that may never have existed except in the bedroom of our imagination. A show not only for Morrissey fans, Unhappy Birthday will appeal to anyone who has ever been a pop music fan, experienced teen angst or been crushed by unrequited love.

UK/Spanish live-art group Sleepwalk Collective present their latest work AMUSEMENTS on Mon 23 Jul. 1st Prize-winners at last year’s BE Festival, the show is an insolent, tempestuous new solo work for theatres, described by the company as “Like some backroom carnival ride / lo-fi sci-fi pleasure machine / psychedelic Hispan-ploitation micro-epic / end-of-the-pier minimalist live-art spectacular”. AMUSEMENTS is intensely sensorial, using a complex score of live and pre-recorded text and music which the audience experience through headphones, the performance is both a joyous dance towards the limits of pleasure and an unsettlingly voyeuristic tribute to our private desires. 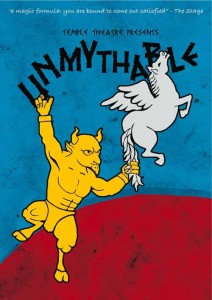 Temple Theatre will be bringing ancient stories to life with UNMYTHABLE on Tue 24 & Wed 25 Jul. This fast-paced, funny, daring and delightful show for all ages takes a whistle-stop tour through the greatest Greek myths ever told with storytelling, singing and clowning. Join the young hero Jason on board the Argo as he sets off on his biggest mission yet – the quest for the Golden Fleece. Along the way there will be challenges and terrifying obstacles to overcome but, most importantly, there will be stories under the stars. Featuring legendary heroes, deadly monsters, epic fights and fantastical flights, this is a theatrical voyage not to be mythed. ‘The actors switched between roles mid-conversation with perfect slapstick timing. It didn’t matter whether the myths were the familiar ones or more obscure, they made every story engaging, exciting and entertaining.’ – The Oxford Journal