As the Paralympic Games prepares to return to the country of its inception this summer, one of the world’s leading experts on the competition has launched a 370-page book charting the event’s history and development since the 1940s. 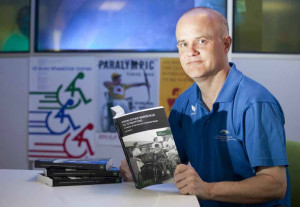 Dr Ian Brittain of Coventry University’s Centre for Peace and Reconciliation Studies (CPRS) has dedicated 12 years to researching and writing the book, which is entitled From Stoke Mandeville to Stratford: A history of the Summer Paralympic Games.

It is intended to be the most complete resource on the Paralympic Games to date, featuring not only facts and figures but an extensive image collection including posters and winners’ medals – many of which have never before been seen in print.

The book also includes a comprehensive British Paralympic history for the summer Games, including the names of all participants and medallists from the UK who have competed since the annual event became part of the Olympic sphere for the first time at Rome in 1960.

Dr Brittain’s account of the Paralympic competition also details its first 12 years when it was known as the Stoke Mandeville Games – a period about which, historically, information has been scarce – offering unprecedented insight into how it evolved from its origins as a small archery demonstration on the front lawn of Stoke Mandeville Hospital, Buckinghamshire, in 1948, to the first officially recognised Paralympic Games in 1960.

Dr Brittain said: “London 2012 will be something of a homecoming for the Paralympic Games, so it’s a pleasure to be making this book available for people to enjoy in time for this summer’s event.

“A lot of the original material relating to the early Paralympic Games has, regrettably, either been destroyed by fire or disappeared into landfills due to lack of awareness as to its value and significance. It’s been an ambition of mine to salvage as much of this history as possible and bring it together into a single, easy-to-read volume. Hopefully it will inspire others to continue contributing to a more complete history in much the same way as has happened with the Olympics Games.”

Sir Philip Craven MBE, president of the International Paralympic Committee, said: “I welcome this latest book detailing all Paralympic Summer Games since their inception in Rome in 1960 to the incredible edition that took place in China in 2008. Ian Brittain’s scholarship is renowned for its detail and his ability to hunt down the final statistic or piece of information that completes the picture. His determination is a perfect example of one of the Paralympic movement’s key values.

The book is available in stores now.

Dr Ian Brittain’s blog, which offers further comment on and insight into disability sport and the Paralympic Games, can be viewed at http://paralympicanorak.wordpress.com, and you can follow him on Twitter at @Dr_Ian_Brittain.

From Thursday 23rd to Saturday 25th August – just a week prior to the start of the Paralympic Games – the CPRS and the International Wheelchair and Amputee Sports Federation (IWASF) will be hosting an international conference at Coventry University focusing on the use of disability sport as a tool for peace, development and social inclusion.

For more information on the conference and to book a place, click here.